As already mentioned in previous articles, bullion investors should always stick to buying bullion coins and bars from renowned government mints and private mints as these bullion products sell for the lowest premiums and are also much easier to sell when the time has come. However, one of the joys of bullion coin collectors is to own coins that can be deemed special or exotic for some reason. The silver coins of the Laos Jade Lunar Series certainly fit that description for multiple reasons.

First of all, Laos is not the country that you would normally expect to be capable to issue silver coins of bullion quality since it is one of the poorest and least technologically advanced countries in the world. In fact, the 99.9% pure silver coins of the Laos Jade Lunar Series are indeed not manufactured in Laos but under license by the private mint and dealer MDM in Germany. Only 2 oz proof coins are minted and annual mintage numbers are strictly limited to 2888 pieces. The other specialties of this coin series are a ring-shaped insert made of green jade on the reverse side of the coins as well as selective gold plating (99.99% pure gold) on the jade piece and the silver coin base. 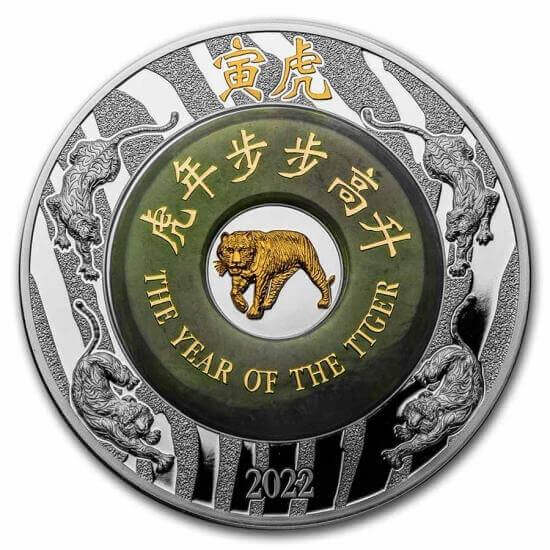 The reverse side of the collectible silver coins of the Laos Jade Lunar Series always shows the respective lunar zodiac animal in various poses. The main image among those at the coin’s center is gold-plated. The respective year of mintage as well as the dedication to the respective year’s zodiac animal is inscribed in Chinese and English on the reverse side of the coins, the latter among those on the jade ring itself in gilded letters.

Compared with the original and highly unique reverse side design, the obverse side of the Laos Jade Lunar Series coins looks quite plain. It depicts the national emblem of Laos which shows the Pha That Luang, a large gold-covered Buddhist stupa that is located at the center of Vientiane, the capital city of Laos. The coins’ 2 oz weight, 99.9% silver purity and 2000 KIP face value also appears on the obverse side of the fairly large coins (diameter of 55 mm).