Most coin collectors have probably never heard of the Japanese Gold Oban. That is not really surprising since these oval gold plate coins (the Japanese word ‘Oban’ means ‘big plate’) were minted a really long time ago in Imperial Japan and never in large quantities. Many people may have seen an image of such an ancient Japanese coin though without even realizing it. The “beckoning cat” souvenir toys that many tourists buy for good luck in Asia often have such an ancient Japanese coin depicted dangling from their neck collar.

The Japanese Gold Oban was first minted in AD 1588. These first Gold Obans that were known as the Tensho Oban were hammered into three different sizes. The largest among those was 17 cm long and 10 cm wide. The gold for the minting of the coins came from gold mines all over Japan. Each Tensho Gold Oban weighed 165 grams and consisted of 74% gold and 26% silver.

Further series of Japanese Gold Obans were minted until the year 1860. These were the Genroku Oban, Kyoho Oban, Tempo Oban and Man’en Oban. When Japan reformed its currency in the year 1871, the Gold Oban lost its status as currency and the monetary units ryo were replaced by the yen which is still Japan’s official currency today. 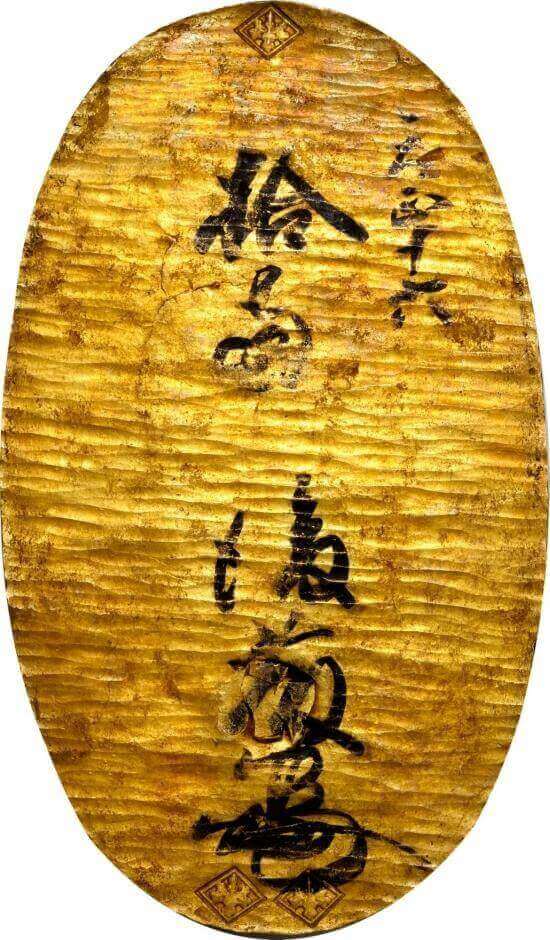 What is highly unusual about the Oban as a historic gold coin is that it had its denomination inscribed on it in black ink. Three or later four embossed marks on the front side of the coin showed that it was in fact a legitimate gold coin and not a forgery. Obtaining an original Gold Oban these days should be nearly impossible for most collectors. They were never minted in large numbers and few have survived the centuries. However, there existed also smaller gold coins in ancient Japan – the Japanese Gold Kobans – that I plan to dedicate another blog article to in the near future. What’s more, Japan is still minting gold coins during our modern times, so it is certainly possible for collectors to add Japanese gold coins to their collection.