If you have read our recent blog article about the Japanese Gold Oban, you may be able to guess that the Japanese Gold Koban must be a similar ancient coin from feudal Japan. That is indeed the case and you may consider these two types of ancient Japanese gold coins as sort-of relatives.

The essential difference between a Japanese Gold Oban and a Japanese Gold Koban is their size. While the Japanese word ‘Oban’ means ‘big plate’, the word ‘Koban’ means – you probably guessed it already – ‘small plate’. In general, one Gold Koban was about one tenth the value and size of a Gold Oban. Feudal Japan still used the monetary unit ryo and Gold Kobans each had a value of 1 ryo whereas Gold Obans were worth between 8.5 and 10 ryo.

Aside from their obvious size difference, there are a lot of similarities between the Gold Oban and the Gold Koban. Both types of Tokugawa coinage were oval in shape which makes them look very exotic in our modern times (when most coins are round in shape). Their minting periods are also very similar. Whereas Gold Obans were minted from AD 1588 until 1860, the minting period of the smaller Gold Kobans lasted from AD 1601 until 1867. 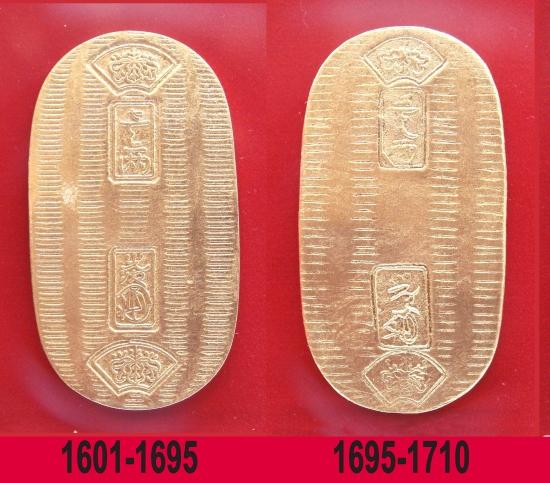 Another similarity is the successive reduction in gold content that occurred over the centuries for both coin types. Initially, a Gold Koban had a weight of 18.20 grams and was typically minted out of an alloy of 85.69% of gold and 14.25% of silver. However, the Japanese Gold Kobans that were minted in later periods were so debased in their gold content that merchants preferred counterfeit Gold Kobans from earlier periods (as these illegitimately minted older coins contained more gold than the legitimately minted newer coins).

If you’re now confused how to tell the Gold Obans and Gold Kobans apart from each other, there is one sure way to do that (apart from the size). In addition to the embossed marks that appear on the front side of both coin types (that showed that the coin was legitimate and not a forgery), the larger Gold Obans also had their respective denomination inscribed on their front side in black ink. The smaller Gold Kobans on the other hand don’t have any ink inscription on their surface.