As the city of Hong Kong has been in the news quite often recently due to the ongoing protests there, I thought some readers of this blog might possibly be interested to read an article about Hong Kong gold coins. Gold coins from this semi-autonomous part of China could indeed be an interesting niche for collectors to get into, especially since there aren’t so many different issues that came out over the years.

When searching the web for Hong Kong gold coins, the most common coins you will likely encounter are the zodiac gold coins that were issued between 1976 and 1987. During these 12 years, each year was dedicated to one of the 12 Chinese zodiac animals. The zodiac animal was always depicted on the reverse side along with the word HONG KONG in English and Chinese and the HKD 1,000 denomination. A bust of the British Queen Elizabeth II always appeared on the obverse. 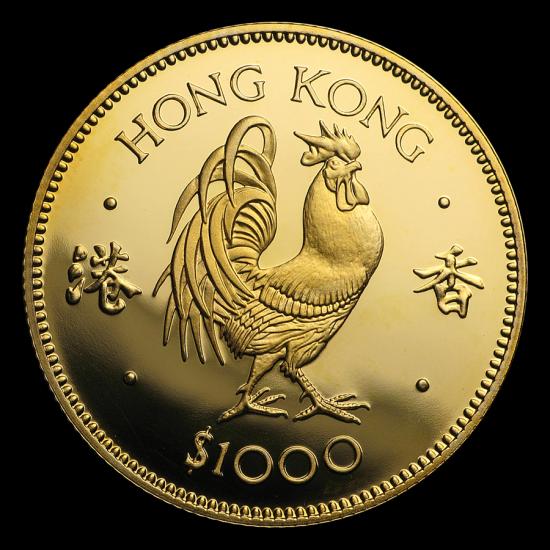 Both a brilliant uncirculated and proof version of the coins was produced by Britain’s Royal Mint. (After all, Hong Kong was still a colony of Great Britain at the time when these coins were produced and issued.) Hong Kong’s historic Chinese zodiac coins were produced to the same standard (91.67% gold purity) and have the same actual gold weight of 0.4708 oz as the British Double Sovereign coins.

In addition to the zodiac coins, Britain’s Royal Mint also issued HKD 1,000 Hong Kong gold coins in 1975 and 1986 that commemorated royal visits by Queen Elizabeth II. The 1975 coin was Hong Kong’s first-ever HKD 1,000 gold coin which started a series of annual issues (the above mentioned zodiac coins) that continued until 1987 when the last Hong Kong zodiac gold coin was released for the Year of the Rabbit. In 1997 and 1998, the issuance of 22 karat gold coins with a HKD 1,000 face value resumed. Whereas the 1997 issue that was produced by the Royal Canadian Mint was dedicated to Hong Kong’s return to the motherland that year, the 1998 issue that Britain’s Royal Mint again produced featured the then newly-opened Hong Kong International Airport.