So what are holographic coins? These are coins that display holographic images on one or both of their surfaces. The images are created with special technology and then embossed into a kind of resin layer on top of the coin. With newer technology, it is even possible to create the holographic effect on top of the engraved coin surface. In this way, the hologram doesn’t necessarily occupy the entire coin surface but perhaps only a certain part of it in order to enhance the engraved coin design.

While doing some research to learn more about the exact process of creating holographic coins, I came across this technical page. It describes some of the concepts and steps in the creation of such coins. Few mints are able to produce holographic coins all by themselves at this point as it is quite a complicated process using sophisticated machinery. Mints that do not yet possess the necessary expertise and technology will usually find a partner in the optical industry that will then apply the holograms to their minted coins. If you are a mint and are looking for such a partner, take a look at this page by the company Optaglio. They describe themselves as the global leader in e-beam lithography and would welcome your business I’m sure.

Holographic coins have been issued by both government and private mints out of a variety of metals. It would be impossible to list all the holographic precious metal coins that have so far been issued in this article so I just want to mention a few noteworthy examples.

In 1999, the Royal Canadian Mint issued a hologram version of the Canadian Gold Maple Leafs that count among the world’s most popular gold bullion coins. The occasion for this special hologram issue was the 20th anniversary of the Gold Maple Leaf coins. The International Hologram Manufacturers Association (IHMA) showed its appreciation of the holographic Maple Leaf coin issue with the bestowal of its “Excellence in Holographic Product Award”.

Another government mint that has frequently issued holographic precious metal coins is well-known among bullion investors. The Royal Australian Mint issued a two-channel hologram coin (which shows two separate images depending on the angle of view) in 2001 to mark the end of Australia’s Centenary of Federation. The first of the two images shows the Federation Rotunda, a historic monument that is located in the City of Canada Bay in Australia’s New South Wales. The 2nd image shows a map of Australia in which the states and territories are depicted in different colors. The specific method that was used to create this special rare two-channel hologram coin (of which 10,000 specimens were issued) was patented by Australia’s Commonwealth Scientific & Industrial Research Organisation (CSIRO).

CSIRO also developed another method to produce holographic coins in which the hologram is embossed into a resin that coats one side of the coin. The Royal Australian Mint used this method for one of the coins that make up the “Australia’s coins 2004 Six Coin Proof Set”. The proof coins of this set are not precious metal coins unfortunately. The hologram image on the $1 coin that is included in this set shows five multi-colored iridescent kangaroos that appear to move when tilting the coin slightly. The method to create this effect on a coin is called Replica Micro Moulding. It entails applying a resin to the coin surface that is then struck with a high precision elastomer stamp onto which a finely focused electron beam had previously engraved a complex micro-pattern (the holographic image).

It was also the Royal Australian Mint that produced the world’s first triple Hologram coin. The 2002 Year of the Outback ‘Finale’ proof coin out of silver shows 3 images of the Olgas (a group of large, domed rock formations nearest to the Australian city of Alice Springs). Depending on the tilt of the coin, you will either see a morning scene, afternoon scene or night scene. While the Olgas are depicted in soft morning light in the first image, they seem to burst into fire in the middle of a red-hot day in the second image. In the final third image, they are fading into the twilight of a typical night in the Australian outback. The drastic color changes between the three images were achieved by striking the coin in the press with small metal plates that created microscopically small ridges on the coin surface itself.

The Royal Canadian Mint also produced several more holographic coins in past years. For Superman’s 75th anniversary in 2013, it created the world’s first achromatic hologram coin which displays a three-dimensional image that was created with nanotechnology-based imaging technology. This 99.99% pure 1 oz silver proof coin depicts Superman flying over Metropolis and the Daily Planet. The holographic effect gives Superman the appearance of creating a sonic boom as he breaks the sound barrier during his flight.

The Royal Canadian Mint produced another silver coin with an achromatic hologram in 2014. That coin’s hologram image was created by Optaglio and shows the International Space Station’s robotic arm and a spacewalking astronaut. Issued to mark the 25th anniversary of the Canadian Space Agency, the coin won the IHMA “Best Applied Decorative or Packaging Product” award in December 2015. 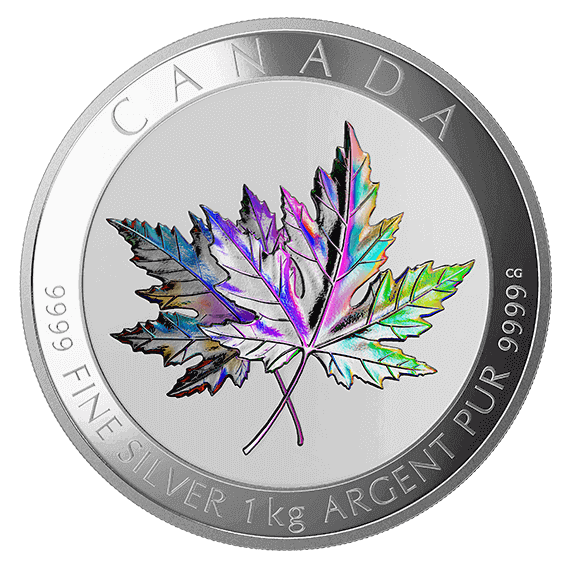 The hologram design on the 1 kg “Maple Leaf Forever” silver coin depicts two sugar maple leaves with overlapping crossed stems. Only 500 such coins were minted out of 99.99% pure silver with a proof finish. Order yours today directly from the mint while supplies still last!

Only 10 “Maple Leaf Forever” 1 kg holographic gold coins were produced that same year. All of them were sold already. The hologram on these rare 99.99% pure proof coins creates an iridescent rainbow effect on the surface of the engraved maple leaf as the coin is tilted. Multiple polishes were used to create this iridescent effect.

It seems fairly certain that we will see more and more holographic precious metal coins released in the future. The technology offers a lot of potential as an anti-counterfeiting measure as well. Smaller mints that create much of their turnover through the sale of commemorative coins would also benefit by issuing holographic coins. It could significantly increase their sales (as holographic coins are very popular with collectors) and help to distinguish themselves from their competitors.