The $50 Half Union Gold Coin

Most historic gold coins that are still actively traded in large numbers these days are pre-1933 U.S. gold coins. The largest of those in terms of gold weight, face value and diameter are the Saint-Gaudens Gold Double Eagles as well as the Liberty Gold Double Eagles. Both of these 90% pure pre-1933 U.S. gold coins have a gold weight of 0.9675 oz, measure 34 mm in diameter and have a face value of US $ 20. Both of these coins however would be dwarfed by the US $ 50 Half Union gold coin that was proposed but never approved by the US government.

The US $ 50 Half Union gold coin was first proposed to Congress in 1854 but it was never approved. However, two pattern coins were made in 1877 and these two specimens have survived the times and can be viewed in Washington D.C. as a part of the National Numismatic Collection at the Smithsonian Institution.

The US $ 50 official face value of the 90% pure Half Union gold coin is matched by two gold bullion coins of the US Mint, the 1 oz American Gold Eagle coins as well as the 1 oz American Gold Buffalo coins. However, both of these contemporary coins (that measure 32.7 mm in diameter) would look small if placed right next to one of the two existing patterns of this historic gold coin which measure almost 51 mm in diameter. With a gold weight of almost 2.5 oz, the Half Union would also have been more than twice as heavy. 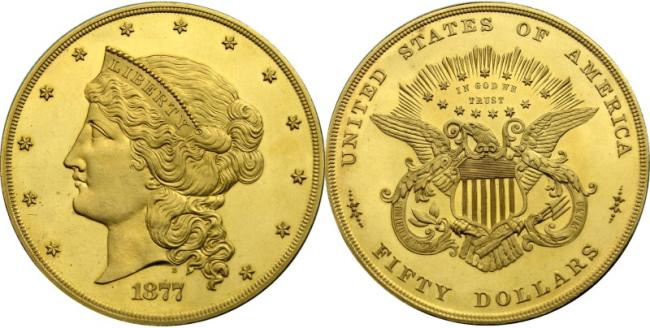 As far as the design of the US $ 50 Half Union gold coin is concerned, it looks pretty much like the $20 Liberty Gold Double Eagle with a leftward facing Lady Liberty on the obverse side and a shielded eagle that is holding an olive branch and arrows on the reverse. Due to the much larger size of the Half Union, this classic design arguably looks much crisper and a bit more detailed on its two surviving pattern coins though.