If you don’t know who or what a Gruffalo is, you are not alone. I didn’t know either until today (February 19th) when I saw this headline that announced the sale of three different Gruffalo coins (a gold, silver and base metal version) by Britain’s Royal Mint. As it turns out, “The Gruffalo” is the title of a very popular and successful children’s book that was first published in 1999. There must be millions of millenials worldwide, especially in the UK, that grew up having this story read to them before bedtime. It was even voted to be the UK’s favourite bedtime story in 2009.

Even though I’m not a fan of infantilizing the hobby of coin collecting, I have to admit that it was a clever move by the Royal Mint to issue coins that bear the image of this imaginary Gruffalo monster. For many millenials, this is probably going to be the first collector’s coin they’ll buy. This way, the Royal Mint has possibly found the key to attracting a younger clientele. If they buy Gruffalo coins now, perhaps they will be open to the idea of buying Gold Sovereigns or Gold Britannia coins in a few years. 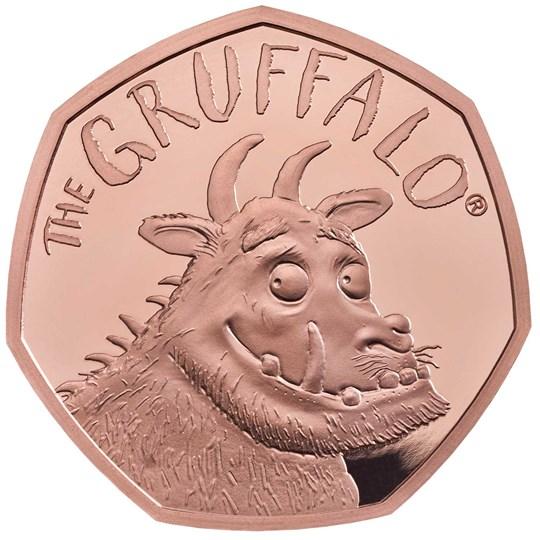 The amount of excitement around these new coins is perhaps even unprecedented. After all, I never before had to wait before accessing a webpage by the Royal Mint. When trying to find some more information about the Gruffalo coins just now, I got this message shown on my screen: “Your queue number: 174266 It is your turn You’re almost there. You will be redirected to the website as soon as possible.” Half an hour earlier, there was even a queue of several minutes and the queue must have been even longer in the early morning hours of February 19th when the Gruffalo coins went on sale.

Now it is only afternoon and shockingly only one of the three versions of Gruffalo coins is still available. That is because it is a base metal coin that is struck without a mintage limit out of a Cupro-nickel alloy. This brilliant uncirculated coin bears the same image of the Gruffalo monster on its reverse side that is also depicted on the sold-out gold and silver version. All three coin versions also have the same denomination of 50p and diameter of 27.30 mm. For a price of 10 British Pounds, the still-available BU coin would certainly make a cute and affordable gift for boys and girls that perhaps only recently had this bedtime story read to them. Simply follow this link to order this coin directly from the Royal Mint.

I am certain that many coin collectors will try to buy the sold-out gold and silver version of the Gruffalo coins on ebay. The 8 gram silver proof coin out of 92.5% pure Sterling silver even depicts a colorized version of the Gruffalo monster on the reverse. Only 30,000 specimens of the Gruffalo™ 2019 UK 50p Silver Proof Coin have been struck, yet that number seems sufficient enough for many of them to eventually become available on ebay. The Gruffalo™ 2019 UK 50p Gold Proof Coin will be much more difficult to acquire through auction sites though since only 600 such coins have been minted. This 22 karat (91.67% purity) Gruffalo gold coin contains 15.50 grams of gold, so it’s about twice as heavy as the other two coin versions.