It is always fun for a collector of precious metal coins to obtain historic coins, even more so if they are from a country that no longer exists at all or at least not in the same form. In today’s blog article, I’d like to introduce a type of historic gold coin that was minted at a time when the European country of Germany was still ruled by an emperor, the Gold Reichsmark. Even though specimens of the Gold Reichsmark are certainly difficult to obtain these days, compared to the rarest gold coin of all, they still exist in relative abundance today.

The German Empire existed between 1871 and 1918. A few years after the many different German states were thus unified, the Reichsbank was founded as the country’s central bank. Besides base metal coins and silver coins, it issued three different 90% pure gold coins, the 5, 10 and 20 Gold Reichsmark. The durable gold coins (due to their alloying with copper) were produced by various minting institutions throughout the country until 1915. The 5 Gold Reichsmark were however only produced in 1877 and 1878 as they were considered to be too small (weight: 1.99 gram, diameter: 17 mm) and unpractical.

The 10 Gold Reichsmark (weight: 3.98 gram, diameter: 19.5 mm) and especially the 20 Gold Reichsmark (weight: 7.96 gram, diameter: 22.5 mm) were however produced in abundant numbers and with different designs. One side of the coins generally depicts the image of one of the three emperors (Wilhelm I., Friedrich III., Wilhelm II.) or one of the kings of the many German states. The other side of the coins shows the eagle as a symbol of the German Empire. 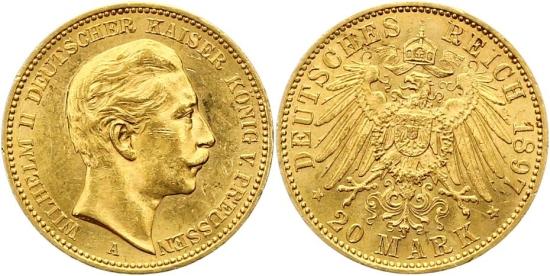 Any collector that desires to buy one of these special historic gold coins has to watch out to not get fooled by forgeries. The small 5 Gold Reichsmark were the most often forged so that it is estimated that a stunning 90% of all existing coins of this type are forgeries. Many forged coins were produced between 1959 and 1962 by the ophthalmologist Dr. Karl-Heinz Schmidt and his sister Ilone Eva Hausmann who then fraudulently sold them as original restrikes.