Coins became precious and rare collectibles because they speak volumes through the ages. It is not only their material value that matters but also the history and diverse knowledge they hold. With gold coins, there is a fascinating blend of precious metal and iconic imagery that adds interesting layers.

Introduced in 1986, the American Gold Eagle is a highly coveted coin that is also a stellar example of iconic imagery used on gold bullion coins. On the obverse, Augustus Saint-Gaudens’ renowned design of Lady Liberty features in all its neoclassical glory, with a torch and an olive branch. The engraving harks back to not just the original 1907 gold piece, the Saint Gaudens Double Eagles, but also the symbol of American Independence. Determination and a positive stride to the future are implied through the torch that gives light and the olive branch that represents peace.

On the reverse, the majestic male bald eagle is portrayed carrying an olive branch to its nest where the female waits with the young. The frozen moment is spectacular for captured motion, the wide spread of the bird’s wings and its descent creating a delightful sense of motion and drama. The unraveling of history takes you back to a period when the bald eagle was fixed as the national symbol depicted on the Great Seal of the United States, a choice attributed to Charles Thomson, the former secretary of the Continental Congress. The portrayal indicates strong family ties that make up the fabric of American society.

Another instance of iconic imagery used on gold coins is the highly popular Mexican Azteca coin that stands apart with the impression of the Aztec Calendar or Sun Stone that is believed to be an elaborate carving of the five worlds of the sun. This replica of the most famous of Aztec sculptures carries mythological, religious, astronomical and astrological references. Although debated, there is also the theory that with the solar deity Tonatiuh in the centre, the structure is actually an ancient sacred calendar with signs and directions. The beautiful 20 Peso Mexican Azteca gold coins feature on the reverse the Mexican coat of arms and an eagle on a cactus, with a serpent held in its beak. The official Mexican plant represents national pride, the eagle and serpent incorporate legend and are also viewed as a symbol for good triumphing over evil. 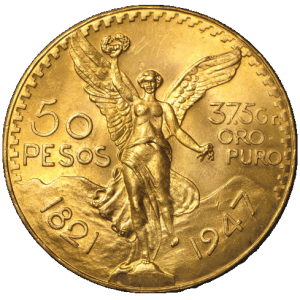 obverse side of the Mexican Gold Centenario coin

Another magnificently designed Mexican coin is the 50 Peso Gold Centenario that depicts the Angel of Independence commemorating Mexico’s hard-won independence from Spain.

St. George and the dragon on British Sovereign coins

The impressions on British Sovereign coins cannot be divorced from monarchy and rich history. The erstwhile empire is recaptured through the depictions of sovereign queens and kings, while St. George slaying the dragon on the reverse refers to Christian mythology and legend and the central themes of bravery and honor that were central to British society as a colonial power.