When you think of designer products, it’s usually things like handbags or various items of fashion wear that will come to mind. When people think of gold bars on the other hand, they usually have the image of a large brick-shaped bar without any adornments in mind. These large bars that you often see in movies are actually “Good Delivery” 400 oz bars that few people will be able to afford to buy. However, one major producer of gold bars is successfully attracting customers with its range of what could be called designer gold bars.

The producer PAMP Suisse that I’m talking about is based in Switzerland and even its name suggests that it has made the creation of gold bars with artistic designs its mission. The PAMP in its name stands for “Produits Artistiques Métaux Précieux” which translates as “artistic precious metal products”. So what makes the gold bars that PAMP Suisse produces artistic? Mostly that would be the artistic design that is stamped into the front side of the minted bars. These bars are produced in much the same way as coins and PAMP Suisse was the first producer to stamp its products with a special artistic design. That first design that is still used on many if not most minted bars today was the “Lady Fortuna” – the Roman goddess of fate and fortune. It is depicted in profile holding a cornucopia filled with gold coins.

The Lady Fortuna design is still the most common design found on the front side of PAMP Suisse bars. However, there are nowadays many new designs available. Fancy a gold bar with a religious symbol on the front? PAMP Suisse can fix you up. Take your pick between a Christian Romanesque cross, the Jewish Am Yisrael Chai, the islamic religious site Kaaba in Mecca, the Indian goddess Lakshmi or a statue of Buddha. These images are engraved on the front side of the bar and such bars are available in sizes ranging from 5 gram up to 1 troy ounce.

Another type of artistic design found on PAMP Suisse gold bars shows the zodiac animals associated with the Chinese Lunar year. This Lunar series just started in the year 2012 with the Chinese Year of the Dragon. Every year a new design is added showing that year’s Chinese zodiac animal along with the corresponding Chinese Hanzi character. The Dragon and the Snake that appeared on the bars in the years 2012 and 2013 are shown coiling around a pillar. In the years that followed, the horse was depicted standing in front of a tree, the goat amidst tall grass, the monkey balancing on a tree branch and the rooster crowing on a rocky outcrop. These Lunar gold bars are available in sizes of 5 gram, 100 gram and 1 oz.

Gold Bars as a romantic gift?

Another kind of artistically designed PAMP Suisse gold bars displays America’s Statue of Liberty in front of a stylized American flag. Finally, for the romantically declined lover there are also gold bars that display a giant rose or a big heart floating above a meadow of roses with the words “Love Always”. Any girl specifically asking/demanding her lover to buy her such a gift would give the term “gold digger” a more literal meaning. These love-themed gold bars are also available in the tiny sizes of 1 gram and 5 gram respectively though. As a surprise birthday or Valentine’s Day present, such a small gold bar won’t break the bank and could be put to use as a book mark by the special lady you give it to. 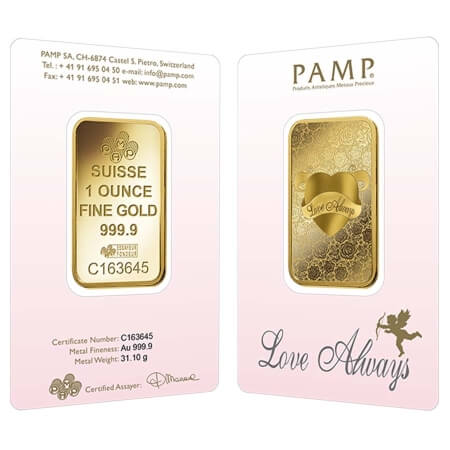 Finally, it’s not only their artistic design that makes PAMP Suisse gold bars stand out among its competitors. A highly innovative product are the Multigram Divisible Bars that can be broken down into smaller segments. Those are available in sizes of 25 x 1 gram, 12 x 1 gram and 8 x 1 gram. The Multigram bars that have 12 or 25 segments display the “Lady Fortuna” image on every individual 1 gram segment. The Multigram bars that only have 8 segments of 1 gram display one of the zodiac animals of the Chinese Lunar Year. In any case, such Divisible Bars might come in handy for bartering once our current debt-based financial system comes crashing down.