Many older investors remember the time when the major world currencies were tied to the gold standard. Now, the startup company Glint has launched an app that aims to introduce a sort of new gold standard in our digital age.

The UK-based company was founded by Jason Cozens and Ben Davies. Both of these individuals have extensive knowledge and experience in e-commerce and financial markets, especially relating to gold and other precious metals. Their startup Glint is backed by several high-profile investors, including Haruko Fukuda who was the former CEO of the World Gold Council. The Tokyo Commodity Exchange (TOCOM), one of the world’s major commodity markets where gold is traded, is also backing Glint. The new company is fully approved as an Electronic Money Institution by the United Kingdom’s FCA (Financial Conduct Authority).

The company’s vision is to allow its customers to save, send and spend their wealth in gold (as well as multiple currencies) through this newly created digital electronic payment system. Whereas other financial institutions will charge you an exchange fee whenever you pay with your credit card in another currency, Glint just uses the interbank exchange rate to convert the currency of the amount you paid. That obviously raises the question how Glint aims to make a profit. Perhaps by adding a typical dealer premium to the spot price of gold and by charging an annual fee for using its debit cards and iOS app? Since I don’t own a smartphone myself, I haven’t signed up for Glint yet. 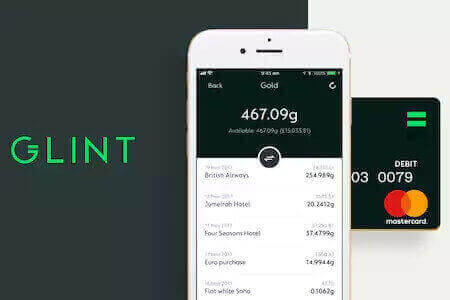 However, most people who read this article probably do own a smartphone. They can already download the Glint iOS app (beta) and register for free. Once your account with them (that works like a bank account) has been approved, you can transfer funds to it and then start buying gold through the app.

It would be important to know how much of a premium above the spot price of gold the company charges. What is already known though is that all the gold you purchase (no matter how much or how little) will be securely stored at a Brink’s bank vault in Switzerland. That secure storage solution is fully accredited by the London Bullion Market Association (LBMA). Even though all the physical gold is stored together at this facility in Switzerland, each user has his/her own gold holdings legally allocated to him/her.

From the information I found online, it seems that it is not possible to use Glint’s services without a smartphone. Also, there is only an iOS version of the app ready for now. I’m sure other app versions (Android etc.) will be added in the future. However, I don’t understand why it is not possible to just log in to the Glint website from a regular computer and buy the gold then just like with regular internet shopping?

In any case, after their accounts have been approved, users will receive their Glint Mastercard within 5 working days thereafter. The Glint Mastercard works just like a regular debit card (so you can only spend up to the amount you have stored on it) but it gives you the added option to make your payments in multiple currencies including gold. Through the app, you can also send funds (and thereby allocated gold) to other users. So, by basing all transactions upon the physical stored gold that a user has allocated to him/her, Glint has de-facto created a new digital gold standard.

I think there is a very real chance that Glint will take off big just like Twitter or Youtube about 10 years ago. Their business model seems logical and the few things that still seem a bit vague about it will be cleared up quickly I’m sure. However, I don’t think it will already take off big right now. It will probably take a major shock to the established financial markets for that to happen. Such a shock (like in 2008, but probably bigger) is sure to come though and many experts already predicted it for 2017/2018.

Once Glint takes off, it will probably have a considerable impact on the gold spot price (which might rise substantially due to the added demand for gold from people who didn’t buy gold before). So joining Glint now while the gold price is still low and buying whatever amount of gold you can afford right now might be a wise choice.