Palladium is an often overlooked precious metal that more and more investors are considering to add to their portfolio these days. Even though the spot price of palladium has increased a lot in recent years, many precious metal investors are not even aware that it is possible to buy the metal in the form of coins and not just bars. In fact, the world’s first palladium coins were minted quite a long time ago in the 1960’s.

However, the world’s first palladium coins were issued by a country that you wouldn’t expect and you may not even have heard of, Sierra Leone in Africa. The occasion for the new issue of these rare palladium coins in 1966 was the 5th anniversary of the country’s independence. The coins were issued with a proof finish in the three different sizes of 10.31 grams, 20.62 grams and 41.25 grams. Production of the limited-mintage collectible coins was outsourced to Britain’s Royal Mint since Sierra Leone didn’t have the technological ability to produce them on its own back then.

The minted palladium coins showed a map of the African country on the obverse side, on top of which appeared the inscriptions “SIERRA LEONE” and “LAND OF IRON AND DIAMONDS” as well as the coins’ denomination in the local currency Golde. The reverse side of the three coins showed the head of a lion surrounded by the inscription “FIFTH ANNIVERSARY OF INDEPENDENCE 1961-1966”. The two fractional coins of 1/4 and 1/2 Golde respectively measured 24 and 32 mm in diameter whereas the largest of the three palladium coins had an official face value of 1 Sierra Leonean Golde and measured 48 mm in diameter. Mintage of each of the three coin types that all displayed the same design was limited to 100 pieces. 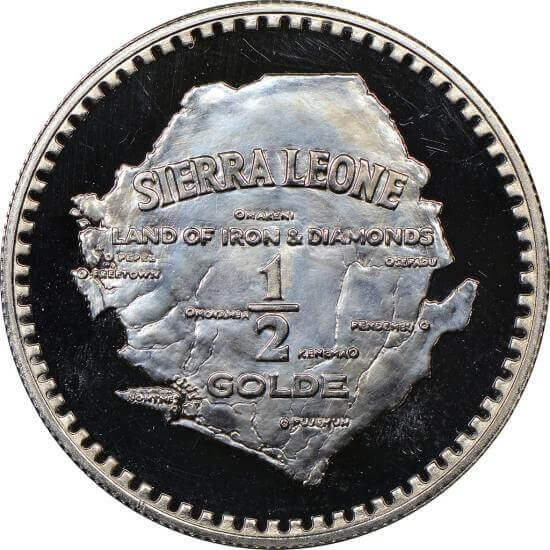 Sierra Leone issued the world’s first palladium coins such as this one back in 1966!

Just one year after Sierra Leone issued these palladium coins, an even smaller country followed suit, the pacific island nation of Tonga. The 1967 Tonga palladium coins that commemorated the coronation of King Taufa’Ahau Tupou IV (whose head appears in profile on the obverse side of the coins) were issued in the three sizes of 16 grams (1/4 Hau face value, 26 mm diameter), 1 oz (1/2 Hau, 33.5 mm) and 2 oz (1 Hau, 48 mm). The denomination of Hau was newly created for the occasion, possibly as a tribute to the king.

The 1967 Tongan palladium coins consist of 98% palladium and 2% ruthenium. They could only be purchased as a three-coin set which had a mintage limit of 1,700 pieces. Tonga’s coat of arms appears on the reverse side of the coins. Another nearly identical three-coin set was issued the following year. In fact, the Tongan palladium coins from 1968 can only be distinguished from those of 1967 by a countermark. Its three lines read “1918 – TTIV – 1968”. It appears on the obverse side of the coins to the left of the king’s head.