For a long time, the gold bullion coin market has been dominated by famous mints like Britain’s Royal Mint or the US Mint. Now it seems that more and more smaller government mints are stepping up their efforts to produce gold coins. India for example seems to have great success with it’s recently issued Indian Gold Coin. Another smaller national mint that is striving hard to make a name for itself in the gold bullion coin market is the Mint of Finland. Until now, not many gold coin collectors or investors have ever heard of Finnish gold coins.

However, when you actually take the time to have a look at the website of Finland’s mint, you will be surprised to find that there are quite a few different Finnish gold coins available. What’s more, a large number of the different Finnish gold coins are minted according to gold bullion standards with a gold purity of 91.67% (the same gold purity as the famous American Eagle gold bullion coins). Of course, there are also collectors coins (including bimetallic gold + silver coins) available that were minted to lower purity standards.

The latest addition to the lineup of Finnish gold bullion coins was just introduced to the public a short time ago. The newest Finnish gold coin that will be issued in 2017 is dedicated to the centenary celebrations of Finnish independence. 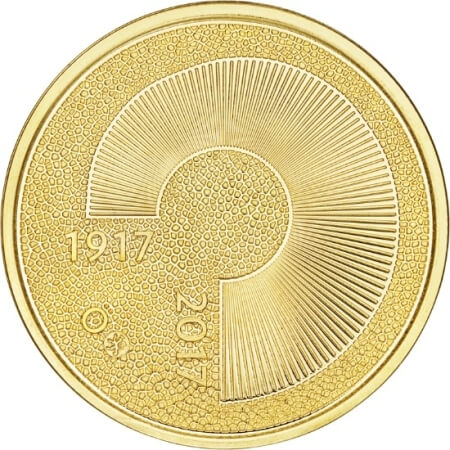 obverse side of the Centenary of Independence Finnish gold coins

The collectors coin with the unusual weight of 0,18 oz (5,65 gram) is made out of Finnish gold with 91.67% purity. Its underwhelming design shows a stylized arch on the obverse side with the years 1917 (when Finland gained independence) and 2017. The arch is meant to symbolize Finland’s growing population during this period. A mosaic of the map of Finland appears on the reverse side of the coins along with the words SUOMI FINLAND and the 100 Euro denomination. 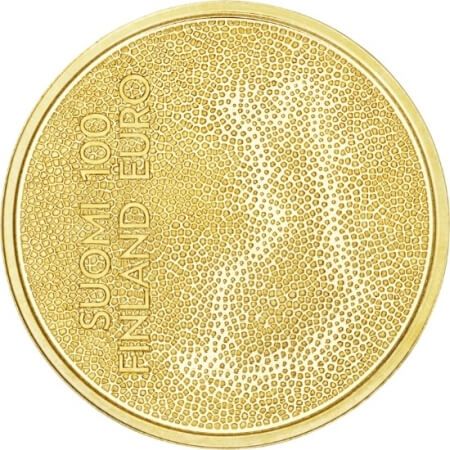 reverse side of the Centenary of Independence Finnish gold coins

The coins with a diameter of 22 mm are only available with a proof finish and the total mintage is capped at 3,000 pieces. The Finnish centenary of independence gold coins are actually already available for pre-order as of today. Delivery will then commence in early January 2017. A similar silver coin will eventually be issued in 2017 as well.