With the exception of the British Gold Sovereign coins whose historic roots reach back all the way to the middle ages, most popular contemporary gold bullion coins can only look back upon a history of a few decades. On the other hand, most colonial gold coins that used to dominate the world market a few hundred years back like the Dutch Gold Ducats or the Spanish Gold Doubloons are either no longer minted or only exist now as limited mintage commemorative coins. One type of historic gold coin that has found fame in history are the English Gold Guineas that were last minted in 1813 during the reign of King George III.

This historic gold coin will now see a revival in 2020, but not as could be expected by the British Royal Mint! Instead the new Gold Guineas are issued by a private company from Britain with a very hallowed name, the East India Company. That name will probably sound familiar to you if you paid any attention during your history classes in high school. After running a quick search just now, I found out to my surprise that this is indeed the same company whose roots reach back to the year 1600 and that traded among other things with tea, coffee, porcelain and even opium during the historic times that Britain ruled the high seas. To be more precise, the new Gold Guineas are issued by a subsidiary of the East India Company, the East India Company Bullion Ltd. that has only been founded in August 2010. When looking at the company’s official online coin catalog, an astonishing number of collector’s coins have already been issued since then. 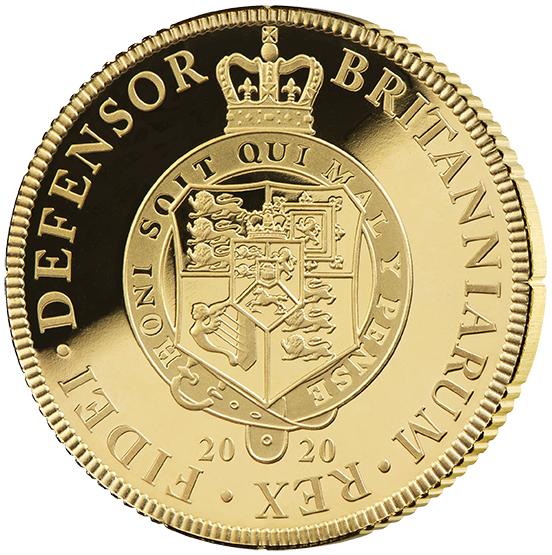 Since a private company like the East India Company doesn’t have the legitimacy to issue legal tender coins, the new 22 karat (91.67% gold purity) Gold Guineas are issued under the authority of the British Commonwealth island of St. Helena. Only three denominations are issued, all with a proof finish: the 1 Guinea (8.4 gram gold weight, £1.05 face value), 1/2 Guinea (4.2 gram, 50 pence) and 1/4 Guinea (2.1 gram, 20 pence). Mintage of the 2020-dated coins is limited to 700 pieces for the 1 Guinea and 200 pieces for the 1/2 and 1/4 Guinea. Whereas the two smaller coins will only be available as a part of a 3-coin-set, the 1 Guinea gold coin can also be purchased individually.

All three 2020 proof English Gold Guineas feature classic reverse motifs (of three different coat-of-arms motifs) that were used on 1 Guinea gold coins during the reign of King George III. Jody Clark’s latest commonwealth effigy of Her Majesty Queen Elizabeth II is depicted on the obverse side of the new coins.