The design of gold coins is undoubtedly one of the major factors determining their popularity. The most common designs to be seen on gold coins’ obverse and/or reverse sides are a country’s coat of arms, the portraits of kings and queens and other country leaders, animals that are symbolic for the issuing country and even images of mythical heroes or heroines. However, unusual imagery on gold coins exists as well such as on Disney gold coins that the Perth Mint issues.

In fact, Australia’s Perth Mint produced two special series of gold bullion coins that are officially licensed by the Disney company. All Disney gold coins of the two series are official legal tender of the Pacific isle of Niue and are issued through the New Zealand Mint. The official Disney gold coins are a part of a two-year program with regular releases of coins that feature some of the most popular Disney characters.

The various coins of the two series have a lot of common features. They are all 1/4 oz proof coins out of 99.99 % pure gold that measure 20.60 mm in diameter and 2 mm in thickness. Another commonality is the type of packaging. All Disney gold coins from Niue are packaged in a beautiful presentation box (wooden coin case contained within themed printed outer box) that also contains a numbered certificate of authenticity. Furthermore, there is a strict mintage limit of 1.000 pieces for each coin design.

The design of the obverse side is identical for all coins of the two series. Ian Rank-Broadley‘s portrait of the British Queen Elizabeth II is displayed on the obverse side which also has the 25 Dollar denomination (Niue Dollars, not American Dollars) and year of mintage engraved along with NIUE as the issueing country and ELIZABETH II.

The first of the two series of Disney gold coins is entitled “Mickey & Friends” and was issued in 2014. A total of six coins make up this series and they can be bought separately or as a complete package. The reverse side of these six coins shows one of the friends Mickey Mouse, Minnie Mouse, Donald Duck, Daisy Duck, Goofy or Pluto in front of a roll of celluloid film. The name of the respective Disney character appears in bold capital letters right next to its image whereas information about the actual gold weight (1/4 oz) and gold purity (99.99 %) can be read in small letters underneath the character (along with the letters “Disney” that is preceded by the international copyright logo). 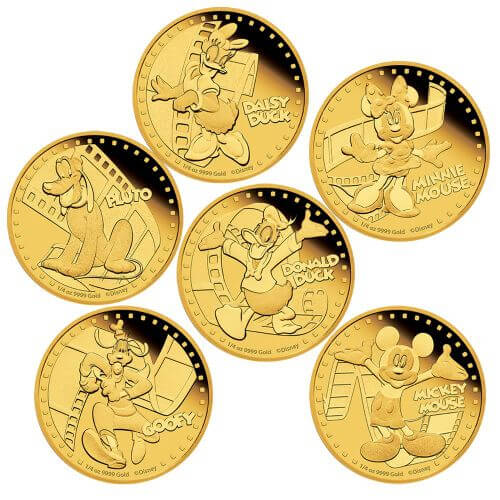 Perhaps due to the famous Disney name (and the corresponding hefty licensing fees), the six “Mickey & Friends” gold coins are sold for about 540 $ US per coin, so you will have to pay a premium of about 200 $ US per coin above the gold spot price to own them. You can save a little money though by buying all six coins at once for a package price of about 3090 $ US. That will save you a little more than a hundred bucks in total.

The second series of Disney gold coins from Niue started in 2015 and so far depicts the famous Disney princesses Mulan, Pocahontas, Merida, Rapunzel, Jasmine, Snow White, Belle, Ariel, Cinderella and Aurora. The price of the Disney gold coins of this second series is a little bit higher with prices ranging from about 580 $ US to 610 $ US per coin. The newer 2016 coins are the higher-priced ones here compared with the Disney princess coins that were issued in 2015.

For Disney fans that are reluctant to pay such high premiums there is the good news that the Disney Princess coin series from Niue is also issued out of silver (99.9 % purity) and with colorized images of the Disney princesses. These colorized silver proof coins were also manufactured by the Perth Mint under official license. The mintage limit here is 10.000 pieces per silver coin design. The 1 oz silver coins with a denomination of 2 Niue Dollars measure 40.60 mm in diameter and 4 mm in thickness.

Besides the two series of Disney gold coins, Niue also issued a few coins with Disney motives that are not part of an entire series. One of these coins shows Dumbo, the Flying Elephant for example. These individual Disney coins otherwise have the same specifications as the coins mentioned above. Visit the Perth Mint Online Shop  now to order them before they sell out!