As already explained in this article on this blog, one of the major drawbacks of cryptocurrency is that it is generally not backed by anything. One of the main benefits of investing in precious metals on the other hand is that their value does not fluctuate nearly as much as that of other assets. Previous attempts to combine the benefits of precious metals with those of cryptocurrencies (like Glint) were largely unsuccessful. Digital palladium that is currently being offered by two different ventures is hoping to change that now.

Just recently, the Russian bank Rosbank started a partnership with Atomyze Russia in order to jointly issue digital financial assets (DFAs) that are based on precious metals. Digital financial assets are financial instruments that are blockchain-based just like cryptocurrencies. The first blockchain-based token that will be issued under this partnership is for palladium. The buyers of these digital palladium tokens will not only be able to trade them but can also exchange them for their equivalent monetary value (which is of course based on the current spot price of the metal). It seems reasonable to assume that tokens for other precious metals like gold, silver and platinum will be offered in the future if the digital palladium tokens turn out to be a success in the financial market. 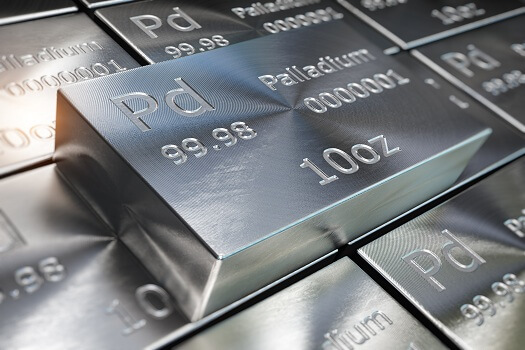 As the appeal of precious metals increases with rising inflation, you can expect more businesses to try to offer digital tokens that are linked to one or more of these metals. Not all of these projects will be legitimate though so buyers should exercise caution. Palladiumcoin.com is one of these projects that looks like a scam. This project is advertised as a palladium-backed cryptocurrency that can supposedly be exchanged for physical palladium at any time. However, there is no specific information about who runs this project on the official website and not even the name of a registered company that is operating it.

For most investors, buying real physical palladium in the form of palladium bullion coins like the American Palladium Eagles or palladium bars is a much better solution than buying digital palladium in any case.