If you have followed this blog for a while, then you already know that a coin doesn’t have to be round to be considered a coin. In ancient China for example, knife-shaped as well as spade-shaped coins were in use during one period. Now, the Royal Canadian Mint has issued a 99.999% pure diamond-shaped silver coin with a real diamond on its surface.

I’m sure that its unique shape and extremely low mintage of only 700 pieces will make this diamond-shaped silver coin highly sought after by collectors worldwide. It is already sold out at the official Royal Canadian Mint Store but I’m sure that it won’t take long for some of these coins to be listed on eBay. 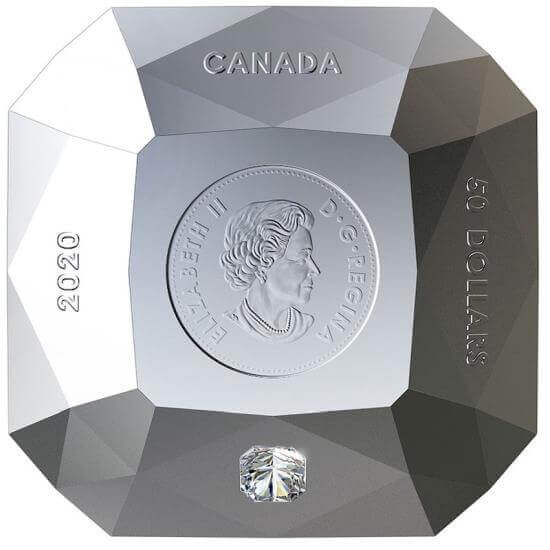 Even though the Royal Canadian Mint is one of the worldwide leaders in minting coins, for this special collectors coin it enlisted the help of two other companies with expertise in diamonds, Forevermark Diamonds and Crossworks Manufacturing. Forevermark provided the 0.20 carat diamond that was mined from Northern Ontario’s Victor Mine. In fact, it was one of the last diamonds that were mined at Victor Mine before it shut down its operations in May 2019. Crossworks then worked the diamond to perfection before it was fit onto the surface of the coin.

Since this is truly a diamond-shaped coin, it doesn’t have an obverse and reverse side like normal coins. On its top, which is the only large enough square flat surface, you will see the same portrait of the British Queen Elizabeth II that also appears on the other Canadian precious metal coins. The coin is made of 3 oz of pure silver and its face value is 50 CAD. The 0.20 carat diamond is embedded into one of the smaller flat side surfaces on the top of the coin. The word CANADA, the year of mintage 2020 and the coin’s face value appear on the other rectangular side surfaces on top of this truly unique diamond-shaped silver coin.