If you buy gold bullion coins for the purpose of investment, it is best to stick to the regular brilliant uncirculated coins as their premiums are generally the lowest. If you buy proof coins, you will already have to pay an additional collectibility premium. That is fine for numismatists but not for investors who want to acquire the maximum amount of gold for their investment amount. Colored gold coins cost even higher premiums above the spot price of gold and diamond gold coins cost perhaps the highest premiums of all gold coin versions that are available on the market today.

So what are diamond gold coins anyway? They are gold coins, usually of bullion purity (so 22 or 24 karat), that have real diamonds mounted within the design of one of its sides. The diamonds are usually quite small so that they serve to accentuate this or that part of the coin’s design. Instead of many smaller diamonds, it could of course also be one slightly bigger diamond that is mounted in a prominent place within the coin design. Most diamond gold coins that exist on the market were produced by the Perth Mint which has an ongoing partnership with Rio Tinto’s Argyle Diamond Mine.

Let’s have a look at our first example. Just recently at Berlin’s World Money Fair, Australia’s Perth Mint released a limited mintage of only eight 99.99% pure gold bullion coins that incorporate diamonds in the design of their reverse side. The 10 oz gold coins have a diameter of 60.60 mm and a face value of AUD $ 2,000.

The reverse side’s inscription “The Jewelled Phoenix” is a fitting name for the coin design which shows a pink Chinese phoenix (14 gram, 81.71% fine rose gold with pavé-set pink Argyle diamonds) that is about to land on a Paulownia tree. Three flowers of the Paulownia tree are also handset with pink Argyle diamonds. The accumulative weight of all diamonds is about 1.22 carat.

If you are excited enough now to want to buy this very special gold coin, I have to disappoint you. All eight specimens that will ever be minted have already been sold to buyers in Australia, Europe and Asia. The Jewelled Phoenix was neither the first nor the only time that the Perth Mint issued diamond gold coins. Just in 2016, it produced and sold a single such coin that had an estimated value of AUD $ 1 million.

That coin, nicknamed the Kimberley Treasure coin, was basically a 1 kg Australian Kangaroo gold coin with the addition of a 0.54 carat red Argyle diamond. The stunning red diamond is mounted on the coin’s reverse side. The Perth Mint’s iconic “Red Kangaroo” design appears on the coin’s reverse (like it does on all large Australian Gold Kangaroo coins) but on this coin, the kangaroo seems to be holding the relatively large red diamond in its front paws.

The Perth Mint produced several more diamond gold coins in recent years. In 2015, it issued the Kimberley Sunset Pink Gold High Relief coin. This 91.67% pure 2 oz gold coin depicts a Kimberley sunset over a baobab tree in Western Australia’s wilderness. The pink Argyle diamond that is mounted on this coin takes the place where the setting sun should be with stylized rays seeming to emanate from it. This beautiful high-relief coin was actually the first Australian legal tender gold coin that included a rare pink Argyle diamond in its design.

In 2017, the Perth Mint even released a 3-coin set of diamond-studded coins. “The Australian Trilogy” set is made up of three 1 kg coins. Each of the coins is made out of a different precious metal. The 99.99% pure Australian Kookaburra coin out of yellow gold shows two kookaburra birds on top of a wooden fence. The two birds are looking in the direction of a round purple-pink diamond (0.47 carat).

The 2nd coin of this set is made out of 91.67% pure rose gold and depicts a cuddly koala underneath a eucalyptus tree in a rural setting. An emerald-cut pink diamond of 0.58 carat is mounted next to the marsupial on this Australian Koala coin. The 3rd coin of this set is made of platinum of 99.95% purity. It depicts an Australian kangaroo bounding across the plain. The diamond on this coin that is mounted underneath the kangaroo is an emerald-cut 0.46-carat dark gray-violet diamond.

Even though the Perth Mint has issued most diamond gold coins so far, the practice was actually introduced by the Royal Canadian Mint in 2012. To celebrate the Diamond Jubilee of the British Queen Elizabeth II that year, the mint issued a limited mintage of 1,500 gold coins that each have a 0.11 – 0.14 carat diamond incorporated near the coin’s edge so that the diamond is visible from both sides. The 99.999% pure gold coins were hand-polished to proof perfection and issued in themed wooden collector boxes. Unsurprisingly, the Queen’s Diamond Jubilee coins sold out very quickly. 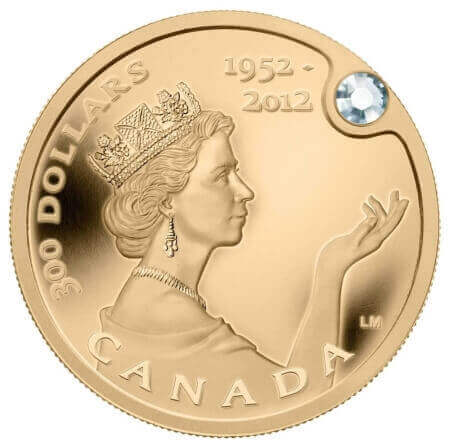 of all the diamond gold coins, this is the only one where the diamond is visible from both sides

The 90th birthday of Queen Elizabeth II in 2016 was another occasion for the Royal Canadian Mint to issue a diamond gold coin. This 99.99% pure “A Celebration of Her Majesty’s 90th Birthday” gold coin of which only 125 specimens were issued worldwide was the first that the Royal Canadian Mint enhanced with not just one but multiple diamonds. The symbolic design includes 29 Canadian diamonds with a combined weight of 0.90 carats (as a reference to the Queen’s 90th birthday) PLUS a large AAA cabochon emerald that brings to mind the Queen’s royal jewels.

In 2017, the Royal Canadian Mint produced 250 diamond gold coins (each coin’s gold weight is a bit less than 2 oz) to celebrate Canada’s 150th anniversary of Confederation. These 99.99% pure gold coins include a 0.20 carat Forevermark™ diamond in their design. The abstract geometric design that surrounds the included diamond reminds of the shape of leaves from the Canadian Maple tree. This “Celebrating Canadian Brilliance” coin is already sold out as well unfortunately.

The diamond gold coins that are introduced in this article are by no means all such coins that exist. If you know of another example, feel free to comment below!