Such counterfeit gold coins have apparently been spotted at markets in Hong Kong and on the Chinese mainland. They are being sold there for prices ranging from $1 to $3 per piece. A large number of these counterfeit gold coins are almost perfect replicas (as far as their look is concerned) of famous gold and silver bullion coins such as American Gold and Silver Eagles, Canadian Maple Leafs and American Gold Buffaloes.

Why the increase in counterfeit gold coins?

In fact, counterfeit gold coins were not nearly as common as counterfeit gold bars in the past. That has changed now with the advent of new minting technology that makes it much easier to produce coins. Laser technology makes it possible and relatively easy to copy the exact look and shape of a genuine coin, no matter which type of metal it is made out of. In China alone, there are many factories that specialize in the production of such fake coins. The coins are later sold online either directly to consumers on sites such as Taobao or to wholesalers via sites like Alibaba. That is probably even legal in China since the coins are advertised as souvenir coins or replica coins.

In the case of fake gold bullion coins, cheap alloys like tungsten, zinc or lead are used and plated with a thin layer of gold. Due to the precision laser technology that is used to make these fake coins, it is hard even for numismatic experts to tell them apart from genuine gold bullion coins by their look alone.

Sometimes it’s possible to identify counterfeit gold coins by examining the packaging. However, counterfeiters have gotten much better in copying the packaging design as well. There might be small details that give away the fake packaging but an untrained investor is very unlikely to be able to spot them.

Coin dealers and numismatic experts can identify bogus coins by their weight, color and light reflection patterns. The weight of a gold bullion coin is guaranteed by the manufacturing mint. The only gold coins that could be very slightly underweight for legitimate reasons are historic gold coins. 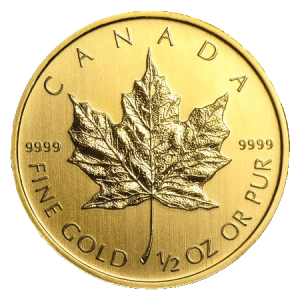 Genuine gold coins out of 99.99% gold like this Canadian Maple Leaf coin have a yellow color that counterfeit gold coins often can’t match

Due to the age of these coins and the handling by many people, a tiny amount of gold could have been rubbed off over the centuries. Some types of historic gold coins are also known to have had small pieces break off at the coin’s edge. The color of nearly 100% pure gold coins should be a glinting yellow. If the coins were made out of 91.67% gold with copper making up the rest, then the gold would have a slight reddish glow. Just compare the picture above this paragraph with the pic underneath. The 99.99% pure Canadian Maple Leaf gold coin above is more yellow in color than the 91.67% pure Krugerrand coin underneath that clearly has some slight reddish hue.

the 91.67% pure Krugerrand is more reddish in color due to its copper content

What other methods are there to distinguish a genuine gold bullion coin from a counterfeit one? One easy method that every gold buyer can try at home is the ping test. This test has been used for hundreds (maybe even thousands) of years by gold traders. It relies on the fact that gold and silver coins emit a characteristic sound when being tapped on the edge by another coin. To do the ping test, balance the gold or silver coin on a fingertip and gently tap its edge with another coin. Gold/silver coins will emit a long ring whereas the sound for base metal coins will be much duller and shorter. Less experienced gold buyers who are not familiar with this test can use a cellphone app that can identify the proper ringing frequencies of gold and silver.

Another easy hint that can help to distinguish a fake from a real gold coin, for example when buying on the internet from eBay or similar sites, is the price the coin is being sold for. Gold is a commodity that is being traded worldwide. The world market price of gold is the gold spot price that can be checked on the internet on many sites.

The spot price is set per ounce of gold so all you have to do is multiply it by the amount of ounces of gold that are contained in the gold coin or gold bar you think of buying. The result of this calculation will tell you the legitimate minimum price that a sane person would sell this gold coin or bar for.

Typically though, sellers will charge a premium on top of the spot price. No person in his right mind will sell gold bullion below the spot price unless a.) the gold is fake (possibly filled in with base metals underneath a thin gold cover) or b.) the gold was stolen from someone. Even in the 2nd case, the gold thieves would probably be able to sell the stolen gold to an unaware gold dealer for at least the spot price. So you should never ever buy gold if the price looks too good to be true (is lower than the gold spot price)!

Lately, the producers of fake gold coins have come up with another trick to fool potential buyers. Now, they are also selling their fakes encapsulated in hard plastic holders and labeled with fake bar codes and registration numbers. The purpose of this is to make the coins look like they’ve been certified by a reputable coin grading service like the PCGS or NGC. The only way to verify the authenticity of such slabbed coins is to contact the coin grading service that supposedly issued it with the suspected fake registration number.

Even then I can imagine a scenario where the buyer could still get duped. What if the coin forger actually used genuine registration numbers on the fake coin slabs? Such numbers shouldn’t be too hard to obtain. Some online gold dealers display high resolution images of their graded coin slabs on their website. The registration number is usually not blacked out on them but clearly legible.

Or a coin forger could pretend to be an interested buyer and visit dealers that sell such graded and slabbed coins. It shouldn’t be too hard to take spy camera images (spy cameras exist in watches and pens for example) of the coin slabs that the dealer shows his ‘customer’ then.

So Buy-Gold.Link once again firmly advises all potential gold buyers to only buy from respected gold dealers that have been in business for a long time and that have counterfeit proofing measures in place.