When we think of counterfeit goods, things like fake Gucci bags, fake-branded T-shirts and shoes at an open-air market in Thailand, iPhone imitations from China and so on usually come to mind. Of course, there is also counterfeit money (e.g. North Korea used to be good at producing fake Dollars), but who has ever heard of counterfeit gold bars? Yet, such a thing exists as well.

In 2012, there were reports about hollowed out gold bars that were filled with tungsten rods. One such bar had been found in the United Kingdom. It had originally been a 1 kg gold bar by the renowned refiner Metalor. The branding and serial number were untouched and the gold bar looked perfectly normal from the outside. The certificate of authenticity was present as well.

What gave the fake gold bar away was its weight. It was a mere 2 grams underweight. That is impossible to happen in the regular production process. The refiner has its bars assayed and guarantees their weight and gold purity. 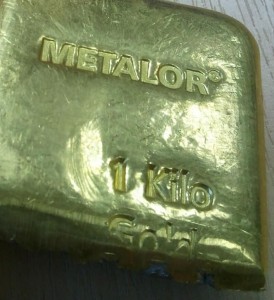 The scrap dealer who had purchased the bar became suspicious because of this and had the bar cut in the middle (see picture above). Imagine the look of surprise on the scrap dealer’s face when he/she saw that the bar was filled with tungsten rods (making up about 30 to 40 percent of the bar’s weight). Lucky thing that he/she only bought one such bar.

Do you really think that whoever tampered with this bar did so only once? There could be many such tungsten-filled counterfeit gold bars all over the world by now, their owners totally ignorant of the fact that they’ve been cheated. After all, who will go to such lengths as to have a gold bar cut open?

How to spot counterfeit gold bars?

Normally, gold dealers and buyers who received a shipment of gold bars will have them checked with a handheld xrf analyzer such as the one in the picture underneath. An analysis with such a tool will only take 2 to 15 seconds without causing any damage to the bar. 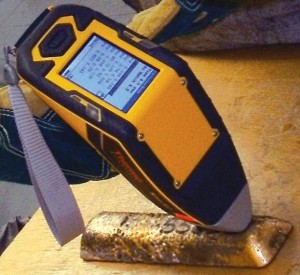 The scrap metal shop owner had also used such an xrf analyzer. The result of this analysis was a bit strange. The tool was reported to have indicated a gold purity of 99.98 %. The Metalor gold bar was guaranteed to be 99.99 % pure but with tungsten rods making up 30 to 40 % of its total weight, the xrf analyzer should have displayed a much lower gold purity, shouldn’t it? Maybe there is someone reading this who can clarify this mystery analysis result? Then, please leave your comment below this article.

Most of the manipulated gold bars were from the renowned Swiss refiner PAMP, one of the most respected names in the business. The process of manipulation was also different this time. Instead of inserting tungsten rods from the side of the gold bar, there was a solid tungsten brick inside the bar that a thin layer of gold foil barely concealed. 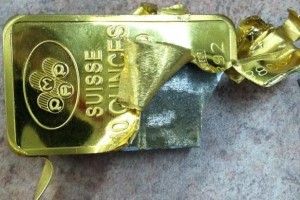 After having been scrutinized and exposed, the counterfeit gold bars looked kind of like a ripped open package of chocolate, wrapped in gold foil instead of the usual silver foil. The article where I found this info doesn’t say whether the thin outside layer was in fact gold at all or just gold paper. If it was real gold on the outside, then manipulating the bar to such a degree required a considerable amount of skill, the kind of skill only a professional jeweler or someone working at a gold refinery would possess.

If it was real gold on the outside, it is also unclear whether the bar had been an original PAMP Suisse gold bar initially (with a legitimate serial number) or whether it just used the PAMP design on the outside (with a made-up serial number). Faking the design wouldn’t have been hard with the modern technology of our time. However, every serial number on a PAMP bullion product is unique and supposedly traceable.

I checked the Frequently Asked Questions on the PAMP Suisse website. There it says under the question 5: “Where can I check certificate numbers for PAMP bullion products? Answer: We do not provide this as a general service, however we may do so under exceptional circumstances. If you believe yours is such a case please contact us”. Reading that answer made me wonder the point of having unique serial numbers if they can only be verified with great difficulty “under exceptional circumstances”?

If I got the offer to buy a PAMP Suisse gold bar from a friend or acquaintance, I would expect to be able to check the serial number easily online. As the price of gold continues to rise, it is likely that refiners will have no other option than to purchase at least some of their unrefined gold in war-torn countries in Africa or other unstable parts of the world. Maybe some day in the future, gold buyers will expect to find a certificate of origin included with their purchase, just like it is with diamonds today. So it seems that gold refiners and mints still have a long way ahead of them before they can be considered transparent and ethical in their business practices as well as serious and effective in the fight against counterfeiters.

Fake 1 oz PAMP Suisse gold bars were also found in California. In that instance, they were fairly easy to spot since even the packaging noticeably differed from the original tamper-proof PAMP packaging (See pictures underneath). The counterfeit gold bars were packaged in what seemed like cheap blister packs and the color scheme and lettering on the assay cards that surround the bar was also different from the original. The color of the fake gold was another hint, clearly showing copper hues at the place where the serial number appears. 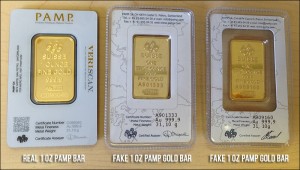 It is as of now unknown who is behind this racket of counterfeit gold bars. The person who tried to sell the fake gold bars to the dealer in New York was apparently a Russian businessman. There is no word online whether that mystery guy was even questioned by the US Secret Service (in charge of preventing the counterfeiting of gold bars) regarding the origin of the fake bars. Some writer even speculated that the Federal Reserve may be behind all this with the purpose of discrediting gold as a viable safe investment. There might be a certain logic to this since the Fed is arguably the biggest scammer of all if you consider the almost magical way in which our money is created out of thin air.

How to prevent getting sold counterfeit gold bars?

Regardless who is behind all this, investors will mainly be worried about how to avoid getting scammed themselves. The first advice I can give is to only buy from respected gold dealers that have been in business for a number of years. Never buy precious metals from eBay or similar sites. If an eBay seller sold you fake bullion, what course of action would you have available to you to get your money back? The seller could be anywhere in the world and simply open another account after eBay cancels the account that was used for selling the fake bullion.

Secondly, the dealer should have counterfeit-proofing measures in place. Money Metals Exchange for example tests incoming bullion in three different ways (Fisch test, sound/ping test, ultrasonic meter test). Doing so many tests might not even be necessary as MME buys most of its bullion either directly from the manufacturing mint or from authorized resellers that do tests of their own. But it’s better to be safe than sorry, right? Gold buyers who want to easily check their purchased bullion at home can do so with the help of a Precious Metals Verifier (PMV). After doing all of this, the only way to be even safer is buying your own gold mine. 😉