Many coin collectors have a strong preference for adding coins to their collection that are somewhat unusual. Mints have used various methods to create such coins like coloring, gold-plating etc. but few mints have so far issued collectible precious metal coins that deviate from the standard and traditional round coin shape. There have been some triangular gold coins though like the coins of the Bermuda Shipwreck series or the Australian Shipwreck series. Instead of experimenting with triangular coins, the Royal Canadian Mint has issued some coins in a shape that would not have been possible to create until fairly recently, convex silver coins. 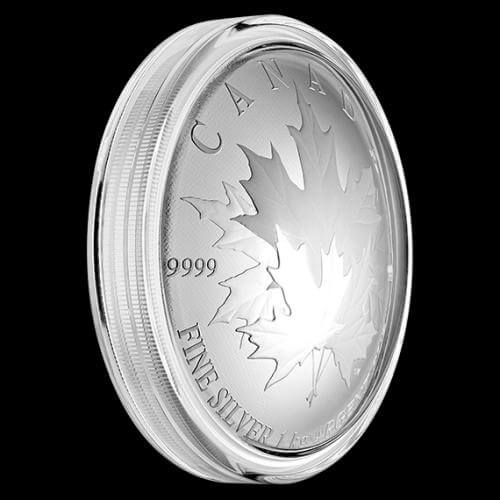 In 2018, the mint issued a limited mintage of 500 large 1 kg silver coins under the Maple Leaf Forever program. These 99.99% pure collectible Silver Maple Leaf coins were the largest convex coins that the Royal Canadian Mint has ever produced. They were however not the first such unusually-shaped coins that the mint produced.

Already in 2017, the mint had issued 2,000 silver coins under the Maple Leaves in Motion program that had this unusual shape. These were 5 oz proof coins and due to the success of their release, the mint followed up with another Maple Leaves in Motion release of similar 5 oz coins in 2018, this time however with an antique finish and a slightly lower mintage of only 1,500 coins.

Already back in 2016, the mint had issued numismatic coins that were concave on one side and convex on the other. The first such coins were apparently issued on occasion of the 140th Anniversary of the Library of Parliament but later on in the year, the mint even issued some numismatic gold and silver coins that were not only concave/convex but even shaped like a football!

Even though the Royal Canadian Mint seems to have mastered the technology of issuing concave/convex precious metal coins unlike any other, a tiny island nation may have been the first in the world to issue silver coins that were convex in shape! To be fair, the slight convex shape of the Orthodox Shrines silver coins that were issued by Fiji in 2012 doesn’t even come remotely close to what the Royal Canadian Mint has been able to accomplish. Niue, which is another tiny island nation also issued numismatic silver coins in 2017 that had a much more pronounced convex dome shape and these special coins were copper-plated with an antique finish and even had a meteorite inlay!