The Olympic Games are currently on the way in Rio de Janeiro and thousands of athletes from all around the world are striving for a gold, silver or bronze medal. Not every athlete might know that the Olympic gold medals are actually only gold-plated silver medals. However, some of the most respected mints in the world have issued commemorative Olympic gold coins in the past that match the quality standards of gold bullion coins.

Let’s take the Sydney Olympics in the year 2000 as an example. As a way to commemorate this event, the world-renowned Perth Mint issued a set of 8 gold coins (8 x 0.32 oz) in collaboration with the Royal Australian Mint. Available with proof as well as brilliant uncirculated finishes, the 8 commemorative Olympic gold coins were made out of 99.99 % pure gold and measured 25 mm in diameter and 2 mm in thickness.

The coins were not only available as part of a complete 8 coin set but individually as well. Each of the 8 designs had a strict mintage limit of 30.000 coins. The first released coin in 1997 sold out very quickly from the mint which makes it hard to get a complete set together now.

The 8 released Sydney 2000 commemorative Olympic gold coins were backed by the Australian government and each had a face value of AUD $ 100. The face value appeared on the coins’ obverse side along with 2000 as the year of issuance. In fact, the coins had been released between October 1997 and February 2000 but they all bear the same 2000 date. Queen Elizabeth II’s profile image by Ian Rank Broadley occupied the center of the obverse side design. 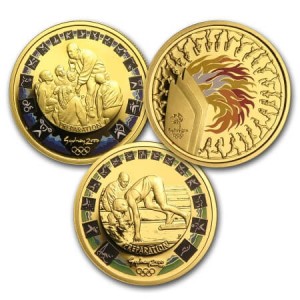 The reverse side of the 8 coins displayed various images related to the Olympic Games. The mint mark P for the Perth Mint was engraved on the reverse side as well. Some of the coins’ reverse side designs were partially colorized which was a first for Australian coins as well as official coins of the Olympic Games. Each coin of the Sydney 2000 commemorative Olympic gold coin series includes a certificate of authenticity with a unique serial number.