Issuing a commemorative coin to mark a certain coin’s mintage anniversary is a good way to get some publicity for a mint and to earn some extra income. So it is no surprise that that’s exactly what the China Mint did to mark the 35th anniversary of its popular Chinese Panda coins. The coins that display a new Panda image on their reverse side every year are still immensely popular among both collectors and investors worldwide.

The Chinese Gold Pandas were first minted in 1982 and Chinese Panda coins out of silver already followed the year after. To mark this anniversary, the People’s Bank of China has just issued bullion-quality commemorative proof coins out of gold and silver that bear new original Panda designs.

The first of these coins is minted out of 99.9% pure gold and has a diameter of 20 mm. The fairly small coin with a gold weight of 5 grams depicts the portrait of a (perhaps smiling?) Giant Panda on the reverse. The background of the coin is filled with all the years from 1982 to 2017. The small Chinese Panda coin has a legal tender face value of 80 Yuan. If you are planning to buy one, better act quickly since the total mintage of this coin is limited to 50,000 pieces. 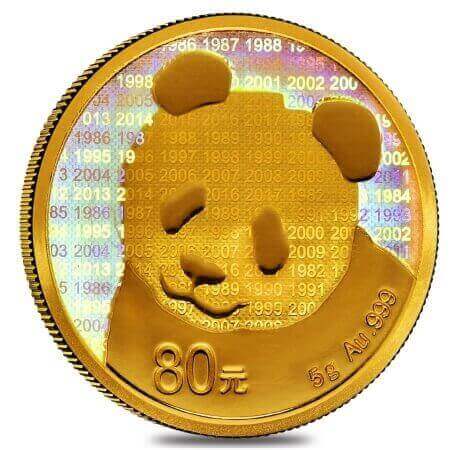 of the 3 commemorative Chinese Panda coins, the golden one is the smallest

The second newly issued coin to commemorate the Chinese Gold Pandas 35th anniversary is a silver coin of 99.9% purity. The coin weighs 15 grams and is quite a bit larger than the commemorative gold coin with a diameter of 33 mm. It depicts a cartoonish panda surrounded by growth rings with year dates. This coin that has a 5 Yuan face value will be much easier to find for purchase online since its mintage limit is set at 200,000 pieces. 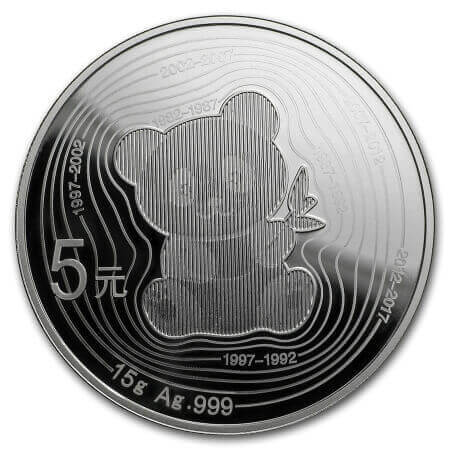 reverse side of the commemorative Silver Panda coin

The third commemorative Panda coin will be the most difficult to obtain since its mintage is capped at 6,000 pieces. What’s more, it is a bimetallic coin with a silver outer ring (12 grams, 99.9% purity) and a gold core (30 grams, 99.9% pure). A Giant Panda that is chewing on bamboo is featured in the center of the coin’s reverse. Small Panda images that appeared on earlier issues of the official Chinese Panda coins can be seen around the big central image on the silver outer ring. The bimetallic Panda coin is the largest of all three commemorative coins with a diameter of 45 mm. Its 500 Yuan face value is also much higher than for the other two coins. 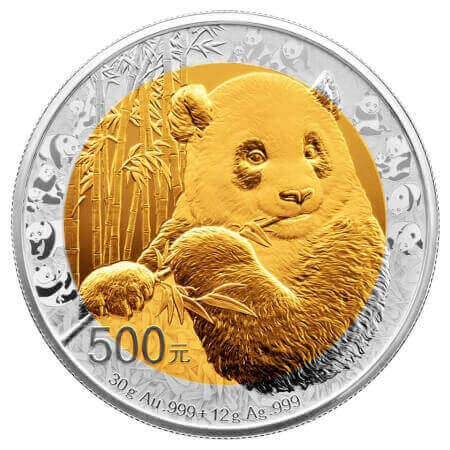 reverse side of the bimetallic Chinese Panda coin

The obverse side of all coins shows the same depiction of the Temple of Heaven in Beijing that can be seen on the regular annual issues of the Chinese Panda coins as well. What is special about the obverse design though is the caption that surrounds the central image. The inscription is engraved in Chinese characters and translates as: “In Commemoration of the 35th Anniversary of the Issuance of the Chinese Panda Gold Coin.”