One government mint that is regularly issuing commemorative coins out of gold and other precious metals is the China Mint. To be more precise, it is the China Gold Coin Incorporation that is charged by the Chinese government with this task. Finding out about the newly issued commemorative Chinese gold coins is not so easy though as not all the Chinese information is picked up by English news outlets. While doing a search on Google just now, I came across this English webpage though on which the China Gold Coin Incorporation introduces its latest issues of commemorative Chinese gold coins.

Most of the commemorative Chinese gold coins (as well as silver and other coins) that you will find introduced on this page are part of a set. There exists for example a 7-coin-set of commemorative coins for the 70th Anniversary of the Founding of the People’s Republic of China, a 6-coin-set for the 7th CISM World Games that just ended in Wuhan, a 3-coin-set with images of the ancient city of Pingyao (a UNESCO World Heritage site and popular tourism destination) in Shanxi province etc. . . . The beautiful coins that make up these sets are generally limited mintage proof coins of 99.9% purity. 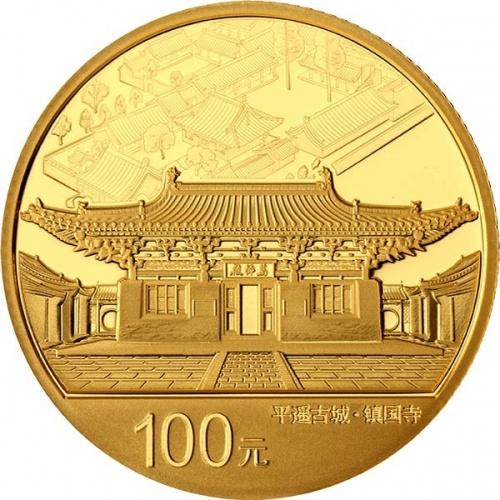 of all the new commemorative Chinese gold coins, the Pingyao set is perhaps the most stunning

However, it seems that not all newly issued commemorative Chinese gold coins will be listed on this page. The most recently announced set of panda-featured coins does not appear on this coin news page of the China Gold Coin Incorporation. The reason for this might be that these coins will only be sold directly at the International Import Expo (CIIE) in Shanghai to which they are dedicated. Obtaining the latest information about all the precious metal coins that are released regularly under the authority of the People’s Bank of China has always been a hassle and I guess that will remain the case for the foreseeable future. Perhaps the best way to always keep up to date would be to visit the China International Coin Expo once a year.