The US Mint’s Commemorative Arts Medals

Few precious metal investors are aware of the fact that the United States Mint ran another gold bullion program before the first American Gold Eagles came out in 1986. The reason for this is probably that the 10 different items that the US Mint released between 1980 and 1984 were not gold coins but gold medallions. The 10 medallions that were minted out of 90% pure gold are most commonly referred to as the Commemorative Arts Medals. Sometimes they are also referred to as the American Arts Commemorative Series Medallions.

The medals were issued by the US Mint in an (unsuccessful) attempt to compete with the South African Krugerrands which dominated the gold bullion coin market at this time. It is estimated that about 1.6 million troy ounces of gold were imported into the US in 1977 in the form of Gold Krugerrands. A couple of years later in 1985, the American President Ronald Reagan actually banned the importation of Krugerrand gold coins due to South Africa’s Apartheid policy.

As the US was planning to reduce its gold stockpile, legislators at first wanted to only sell the standard 400 oz “Good Delivery” gold bars that most financial institutions use when trading gold (and in which form most of the United States’ gold is stored at its Fort Knox bullion reserve). That would have meant that most American citizens would have been priced out of buying some of their own country’s gold reserves. Most gold buyers would probably have been big financial institutions, many of them from foreign countries, which would have resulted in a gold outflow from the country.

To prevent this from happening, legislators proposed fabricating gold medallions out of the stockpiled gold and issuing them domestically as an alternative solution. As far as the design of the gold medallions is concerned, the themes of freedom and human rights in combination with the Great Seal of the United States were considered at first. The ultimate decision to honor American artists was reached because the House Subcommittee on Historic Preservation had received many suggestions of outstanding individuals to appear on an also proposed new dollar coin.

Design of the Commemorative Arts Medals

The name and portrait of the respective artist always appears on the obverse side of each medallion. The reverse design either shows an image of the respective artist’s work (so for example Grant Wood’s painting American Gothic on the 1 oz medallion from 1980) or an image of a certain theme that can be associated with that artist. The year of mintage and the words “American Arts Commemorative Series” surround the central image on the reverse side.

Since 1982, the year of mintage appears on the obverse side of the medallions and the gold weight is engraved on the reverse. The words “United States of America” were added to the design of the obverse side as well that same year. Two other less noticeable changes were introduced in 1982, reeding of the edges as well as denticles (small, tooth-like designs) along the inner rims of the medallions. 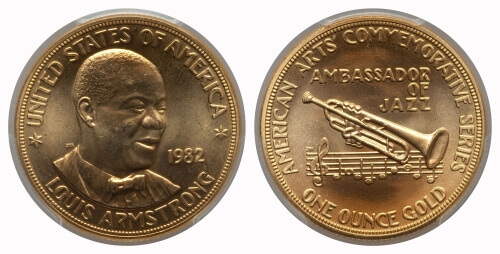 Overall, the Commemorative Arts Medals sold quite poorly. One major reason for this may have been the clumsy way in which they were marketed, especially during their first year of production. Buyers had to make a telephone call to inquire the current price of their chosen 1 oz or 1/2 oz medallion (since the gold spot price fluctuates every day). If they decided to buy that day, they then had to go to a post office to make payment still that very same day.

From the second year on, the medallions were sold by bullion dealers, banks, brokerage houses and coin dealers. The composition of the medallions was also changed a bit in 1981. Though still made out of 90% gold, the other metal components also include silver since then.

Still disappointed by the sales numbers of the series, the US Mint went back to selling the remaining unsold medallions through telemarketing campaigns in 1985. Even though their mintage run ended a long time ago, you can still find the Commemorative Arts Medals listed for sale online even today. One precious metals dealer that still sells them is Apmex. So if you are interested in adding some of these gold medallions to your collection, simply follow this link and make your purchase!