At a time when “quantitative easing” is a common measure to increase the money supply, when banks create new money out of thin air through lending, when the US national debt is steadily increasing and when paper currency is no longer backed by anything (like it was during the time of the gold standard), it is hard to imagine that there once was a time in the US when economic growth was curtailed by a lack of money in circulation. Due to this fact, various foreign currencies including colonial US gold coins (foreign gold coins that circulated in America when it was still a colony) made up that shortfall in cash.

To make up for this shortfall in cash that made trading difficult, various foreign currencies were allowed to circulate freely within the US territory. These colonial US gold coins were only stripped of their legitimacy in 1857 when the Coinage Act was passed by Congress.

Colonial US gold coins from England, Holland and France

Both foreign gold and silver currencies circulated within the US until this time but for this article I want to focus on some of the colonial US gold coins. One of these was the English Gold Guinea which was minted by the Royal Mint between 1663 and 1813. “Guinea” was actually not the official name of these coins at that time. The name stuck though since most of the gold that England imported at that time had been mined for the Royal African Company along the Guinea Coast of Africa.

The English Guinea was essentially a 1/4 oz gold coin of 22 karat purity. That doesn’t mean however that the weight and purity always remained exactly the same during this long mintage period. Just like there were minor changes in weight, the purity also changed very slightly from time to time. On average, a Guinea weighed between 8.3 and 8.4 gram and had a gold purity of around 91%. Fractional Guineas (Half-Guineas, Third-Guineas, Quarter-Guineas) also existed. The coins depicted various portraits of the British monarchs on their obverse sides and various coat-of-arms designs on their reverse sides.

Another type of the colonial US gold coins that were widely traded in the early days of America’s colonization was the Dutch Gold Ducat. Ducats had also been minted by other countries before but the Dutch type was first minted in 1586. These Dutch gold coins weighed 3.515 g and were almost 99% pure (their exact fineness was 0.986 at first which was lowered to 0.983 in 1817). Double Gold Ducats were also minted since 1606 (with double the weight of single Ducats).

A knight in arms that is holding a bunch of arrows in his left hand and a sword in his right is depicted on the obverse side of all Dutch Gold Ducats. The Latin motto “Concordia Res Parvae Crescunt” (translated to “Union makes small things grow”) surrounds the image of the knight and the date of mintage appears on the obverse as well.

The reverse side of the Dutch Gold Ducats shows an ornamented square with a latin inscription inside which is translated to “A coin of the provinces of the United Netherlands according to the law of the Empire”. The basically same design is still used on the Gold Ducats (and also on the Silver Ducats) that the Royal Dutch Mint in Utrecht continues to mint to this day.

Considering the influence that France had during the early part of America’s colonization, it is no surprise that some colonial US gold coins were also minted there. The Louis d’ors that was first minted in the year 1640 was one such popular coin. These French gold coins were minted in six denominations: 1/2 Louis (the demi-Louis d’or), 1 Louis, 2 Louis (the double Louis d’or), 4 Louis (only in 1640), 8 Louis (only in 1640) and 10 Louis. The coins were named Louis d’ors (“ors” is the French word for gold) because their obverse side depicts portraits of the various King Louis that succeeded one another on the French throne at this time (Louis XIII, Louis XIV, Louis XV and Louis XVI). The French royal coat of arms is depicted on the reverse side of the coins.

The French Louis d’ors were 22 karat (91.67% gold purity) gold coins which already was a kind of international purity standard for gold coins back then. The weight of the 1 Louis piece was not always the same throughout the period of mintage of the French Louis d’ors. It weighed 6.75 gram at first, then 8.1580 gram and finally 7.6490 gram. When the Louis d’ors was introduced, it was actually a replica (regarding size and weight) of the Spanish Gold Doubloon coin.

The historic French Louis d’ors was last minted in 1792 (due to the French Revolution) and was followed by the French Franc gold coins. In 2017, the French mint Monnaie de Paris released three proof coins that pay tribute to the Louis d’ors gold coins. The first two of these limited-mintage proof coins were struck out of 99.9% pure gold in the denominations of 1/2 oz (only 500 coins minted) and 1/4 oz (1,000 coins minted). The third numismatic coin of this tribute series was a 90% pure silver coin (22.2 gram weight) that was minted 5,000 times.

The most famous of the colonial US gold coins

The Spanish Gold Doubloon was perhaps the most popular of the various colonial US gold coins that circulated in America during its colonial days. It was another 22 karat gold coin that weighed 6.867 gram when it was introduced in 1537. Since 1728, the coins weighed 6.766 gram but maintained their purity. Spanish Gold Doubloons were originally minted in both Spain itself as well as in its colonies. Mintage in Spain continued all the way until 1849.

Doubloons were minted in the denominations of 1 escudo, 2 escudos, 4 escudos and 8 escudos. The reverse side of Spanish Gold Doubloon coins depicts a “Crusader’s Cross” as well as a lion (symbolizing the Spanish province of Leon) and a castle (symbolizing the Spanish province of Castile). On the obverse side of the coins you will find an image of the Habsburg Shield, the coat of arms of the Habsburg royal family. That symbol was apparently chosen to pay respect to King Ferdinand and Queen Isabella of Spain who were a part of the Habsburg royal lineage. They were the royals who sent Christopher Columbus on his initial voyage across the seas in 1492. 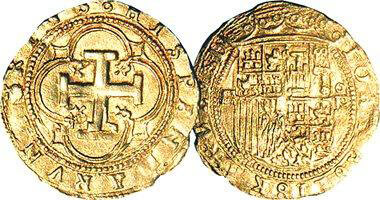 Many Spanish Gold Doubloons were in fact brought into circulation in America by pirates who sailed north to ports such as New York for trade. During the time when Spanish ships still carried immense treasures from the new world back to Spain (including chests full of Gold Doubloon coins that had been minted in the colonies), there were lots of pirates active in the Gulf of Mexico that preyed on these treasure ships.

Besides various foreign gold coins such as the ones mentioned in this article, there were also foreign silver coins in circulation in the colonial days of America. These were mainly Spanish and Mexican silver coins. Count yourself lucky if you have any of the various gold and silver coins that circulated in colonial America in your possession today. They are not only a piece of history but some would fetch a pretty penny if you were ever to sell them at an auction.