One less well-known Asian government mint that has been making great strides in recent years is the state-owned South Korean KOMSCO. It has perhaps become best-known for its Chiwoo Cheonwang medals that are issued in both gold and silver since 2016.

Admittedly, South Korea’s minting operations by KOMSCO are still far from rivaling Asia’s minting giant, which of course is China with its China Gold Coin Incorporation. That is however normal since China already began gaining experience minting gold coins in 1979 when its first gold coins came out. Since 1982, it has captured an ever-growing share of the gold bullion coin market with its annually issued Chinese Gold Panda coins.

KOMSCO, the government-owned Korea Minting, Security Printing and ID Card Operating Corporation, was already founded back in 1951. However, modern South Korea’s first gold and silver coins that were issued in 1970 still had to be minted in other countries since South Korea’s minting technology didn’t meet the required standard back then. Since 2016, KOMSCO has garnered more and more international attention and acclaim for its newly issued gold and silver medals.

Minted out of 99.9% pure gold and silver, the medals are sometimes also referred to as coins since they do have a denomination. However, their denomination is in CLAY which is not a currency but something like a counting word that the Korean Mint KOMSCO introduced when these medals first came out.

The initial 2016 reverse design depicted Chiwoo standing in a field in full battle armor holding a long spear in his right hand and his massive shield in the left. The following 2017 design depicts Chiwoo with his spear and shield as he sits on his horse ready to ride into battle. The horse is shown rearing on its hind legs. The 2018 Chiwoo Cheonwang medals then showed Chiwoo in close-up on his horse during the battle. He has a fearsome look on his face and is shown ready to thrust his heavy sword into the next enemy that comes across his way on the battlefield. 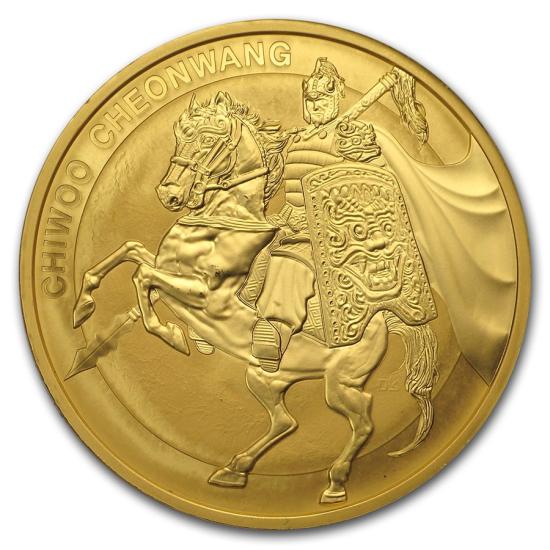 On the 2017 Chiwoo Cheonwang Medals, Chiwoo can be seen in battle gear on his horse

The most recently issued 2019 medals then showed Chiwoo after the battle is over as he is surveying the battlefield. As he stands on a rocky plateau, he has removed his battle helmet and is shown holding his gigantic sword upright with his left hand and his fearsome shield with his right.

The Chiwoo Cheonwang gold medals are available in the 1 oz and 1/10 oz denomination. However, the 1/10 oz medals only exist from 2017 onwards as they were only added to the series following the success of the original 2016 release of 1 oz Chiwoo Cheonwang medals. That means that if you want to save money by buying the 1/10 oz gold medals and still have the complete series of four different designs in gold, you will have to buy the 1 oz gold medals from 2016 as well since that original design hasn’t been replicated on a 1/10 oz Chiwoo gold medal.

Of course, if your main purpose as a collector is to own all existing designs regardless which type of precious metal the coins/medals are made of, then you could save a lot of money by buying the Silver Chiwoo Cheonwang medals instead of the much pricier gold ones. The Chiwoo silver series started in 2016 as well and the four designs that exist so far are identical to the gold version. Whereas only 1 oz Chiwoo silver medals were issued during the first years, a 10 oz and a 1/2 oz version of the silver medals was added in later years. What’s more, proof issues of the silver medals exist as well albeit in extremely limited mintages.