With Christmas now behind us and New Year’s Eve just a day away, another holiday that is getting more and more popular each year is already casting its shadow. Some readers might be wondering which holiday I am talking about but people of Asian descent will know that it can only be the Chinese New Year (or more accurately the Lunar New Year). The new Chinese Year of the Pig will begin on the 5th of February 2019 and is predicted to be a lucky year for many. If you are planning to offer gifts to your Chinese friends (or friends from other Asian countries) that day, why not surprise them with some Chinese Lunar coins out of gold or silver!

If you have been browsing this site for some time already, then you’re probably already familiar with the Lunar coins that are issued by Australia’s Perth Mint. The Australian Lunar coins for 2019 are already available for ordering. They show the image of a pig that is standing between some rocks and a patch of grass on their reverse side. I think it is safe to predict that the up to 30,000 coins that will be minted of each denomination will sell quickly, especially since this will be the last year of this popular coin series.

Britain’s Royal Mint is the second renowned government mint that issues Lunar coins out of gold and silver every year. The animal design on the reverse side of the Shengxiào Collection coins is always created by a famous British artist. This year it was Harry Brockway who designed the reverse of the latest 2019 edition. It shows a mother pig lying on the ground with her five children feeding from her. What makes the design even more charming is the countryside landscape that appears in the background with smoke rising from a traditional country home towards the moon and stars above. You won’t find the Royal Mint’s Lunar coins as easily available as those of the Perth Mint. That is because of their extremely limited mintage just like every year before. Whereas the Perth Mint’s Lunar series will end in 2019, the Royal Mint’s Shengxiào Collection will continue.

It’s perhaps a little strange that the two most famous types of Chinese Lunar coins are issued by Britain and Australia instead of China. However, the mints of the China Gold Coin Corporation in Shenzhen, Shenyang and Shanghai have not been idle in this regard this year. Instead they have issued some really unique commemorative Chinese Lunar coins that celebrate the Year of the Pig 2019. The 99.9% pure silver proof coins display the cute image of a lounging pig on their reverse (and a stylized pig’s head in the background). The national emblem of the People’s Republic of China appears surrounded by an auspicious pattern of fish and lotus flowers on the obverse.

What is highly unusual is that the coins will be available in the shapes of a fan and a scallop in addition to the normal round shape. The different coins of all three shapes have the same nominal face value of 10 Yuan and weight of 30 grams. Collectors that want to buy some of these special commemorative coins will probably have no trouble finding the round version of the coins listed for sale somewhere. After all, the maximum mintage of the round coins is set at 300,000 pieces whereas only up to 60,000 pieces each will be minted of the scallop and fan-shaped coins. 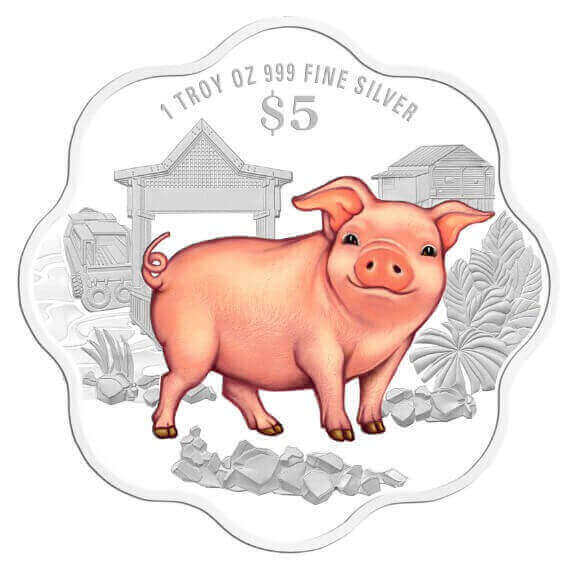 The small city state of Singapore is another place where the Chinese new year will be fervently celebrated this coming February. The Monetary Authority of Singapore has issued its fourth set of Chinese Lunar coins for collectors. The coins were produced by the Mint of Singapore and feature the lovely image of a smiling pig in front of characteristic features of the island of Pulau Ubin. A full set includes three 99.9% pure silver coins (1/4 oz colored, 1 oz and 1 oz colored) and one 99.9% pure 1/4 oz gold coin. All of them are proof coins of course and their maximum mintage numbers are quite low which makes the coins even more interesting for collectors.

The colored 1 oz silver coin will probably be the easiest to obtain as its maximum mintage is set at 15,000 pieces. However, only up to 1,500 pieces of the 1/4 oz gold coin will be minted and only up to 2,000 pieces of the 1 oz and colored 1/4 oz silver coins. I could imagine that the coins would make a nice gift for children. After all, if a smiling pig can’t awake their interest in coin collecting, then I don’t know what can. The Singapore Mint apparently has the same idea as their sales page shows. So you better hurry to order these coins for your kids before they are all sold out!

Another lesser-known mint that is issuing Chinese Lunar coins is the Mint of Kazakhstan. To be accurate, the coins it issues on behalf of the National Bank of Kazakhstan are Oriental Calendar coins and not Chinese Lunar coins. The creation of the coin series that is now in its 9th year was inspired by the Oriental Calendar Fountain which stands near the Academy of Sciences in Almaty, Kazakhstan. The 12 zodiac animals that are featured on that fountain as well as on the coins represent the traditional Kazakh calendar, which is similar but not identical to the Chinese Lunar calendar.

A stylized pig at the center of Kazakhstan’s Chinese Lunar coins for 2019 is surrounded by the symbols of the other 11 zodiac animals of the Oriental Calendar. Two versions of the coins are issued, a 31.1 gram coin out of Sterling silver (92.5% silver purity) and a 7.78 gram coin out of 99.9% pure gold. Both are proof coins and their maximum mintage is strictly limited to 1,000 coins for the silver version and only 200 coins for the gold version. Kazcoins.com is perhaps the only online shop where you can order these coins, so hurry to get yours while supplies last!