American Gold Eagles are arguably the most well-known gold bullion coins worldwide at this time. The US Mint produced many other bullion coins in the past out of gold and silver that are still in high demand among collectors today. Three such popular silver bullion coins of the past celebrate their 100th anniversary this year. The US Mint has decided to celebrate the tradition and original design of these silver coins by issuing three special centennial gold coins (24 karat) this year that feature the same iconic design as the original silver coins.

The first of the three centennial gold coins is the Winged Liberty Head Dime (a.k.a. Mercury Dime) that the US Mint had struck between 1916 and 1945 out of 90% pure silver. Its centennial reproduction out of 99.99% pure gold (24 karat) was released by the US Mint on the 21st of April 2016. Almost the entire mintage limit of 125,000 pieces was sold within the first few days. 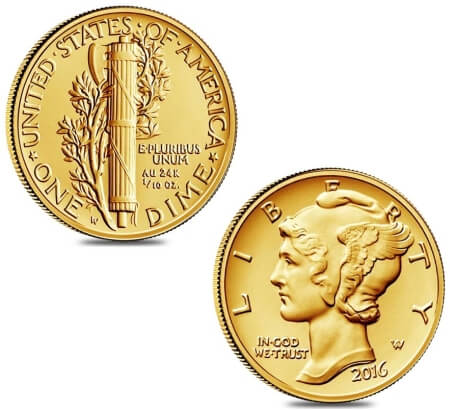 The order period for the second centennial gold coin by the US Mint that is also minted by the West Point branch just started on September 8th. It is a remake in gold of the Standing Liberty Quarter that had originally been issued in silver (90% purity) between 1916 and 1930. The 1/4 oz Centennial Standing Liberty Quarter out of 99.99% gold shows Hermon A. MacNeil‘s original design of an eastward facing Lady Liberty striding through a gate with a shield in her left hand and an olive branch in her right. The coin’s reverse side depicts an eagle in full flight.

The third specimen of the three centennial gold coins for 2016 will be a 1/2 oz coin. There is no information available yet when exactly it will be released this year. It will be the Walking Liberty Half Dollar that had originally been minted between 1916 and 1947 out of 90% silver. Adolph A. Weinman’s original obverse design, that will be replicated on the 1/2 oz Centennial Walking Liberty Half Dollar gold coin, shows a full-length Lady Liberty wearing a Phrygian cap with the American flag over her shoulder. She is depicted striding towards the rising sun while carrying branches of laurel and oak. The coin’s reverse shows an eagle with unfolded wings that is about to lift off from a rocky mountaintop next to the single sapling of a mountain pine.