Most people who read this are probably aware of the fact that cryptocurrencies like Bitcoin are surging at the moment whereas the prices of precious metals hardly budge. Will this trend continue in 2018? This short article is meant to give you my perspective on this issue. Keep in mind that I’m not an expert on Bitcoin or other cryptocurrencies. However, the opinion of an outsider looking in can sometimes be valuable, so here it goes.

As I am writing this now, 1 Bitcoin is worth 14827.73 US Dollars. Back in October 2017, 1 Bitcoin was worth about 6,300 US Dollars. If you think you must rush to buy Bitcoin now, hold your horses for a moment. With the price more than doubling in 2 months, do you think the number of shops that accept Bitcoin has also doubled? Of course not. Knowing human nature, you will know that most people/companies who have something to lose will think twice before accepting something as payment that is so highly volatile. After all, what is shooting up very quickly can also come crashing down very quickly.

The number of shops that accept Bitcoin is certainly increasing but not as fast as the demand for this and other cryptocurrencies rises. So Bitcoin’s usefulness as a way to pay for your daily necessities is still very limited. That is even more the case if you live in poorer areas of the US/Europe or even as an expat in a developing country.

So what about Bitcoin as an investment? When investing, people essentially look for two things, stability as well as a potential for gains. When investing in stock for example, people who look for stability tend to mostly buy shares that pay dividends. Bitcoins don’t pay any dividends or interest so people buy them in the hopes that their value will continue to rise in value. 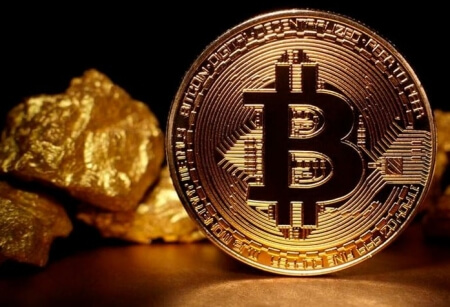 Buy gold or Bitcoin? – that is the question in early 2018

The same situation happened in China a few years ago in the stock market. Since few Chinese stocks paid dividends at the time (and those that did already had very unfavorable earnings per share to price per share ratios), the increasing number of ordinary people that started investing in it (after they heard of the rapid gains of those who had started investing in the stock market earlier) was primarily motivated by the prospect of rapid gains. Those gains continued as long as more and more people got into that market.

Eventually though, the number of new buyers entering the market where they have to buy stock/Bitcoin at already inflated prices will slow down. An asset price that has then become so overvalued as to act as a deterrent to people to buy more of it (or buy some of it for the very first time) has only one way to go and that is down. Now, any bubble is an opportunity as long as you get out before it pops. Most people who start investing in cryptocurrencies now probably go in with this mindset: “I will buy it now while it goes up and I will sell it once it starts going down substantially.”

When will the Bitcoin bubble burst?

The danger with that way of thinking is that nobody can predict when a bubble pops. The market is shaped by the individual actions of all its participants and you simply cannot predict when a significant number of people will get into panic mode (or simply feel the desire to cash in their chips) and start selling. It’s kind of like a herd of animals stampeding. A stampede starts small with one animal or a group of animals and ripples outward until the entire herd is in full panic mode.

Once the Bitcoin market goes into that mode, there may not be enough time to liquidate your cryptocurrency assets and get out. At the time of the Wall Street Crash of 1929, so many stocks were sold in such a short time that “the report of prices on the ticker tape in brokerage offices around the nation was hours late”.

If the Bitcoin price was to drop very suddenly and sharply, would there possibly come a time where the price updates would fall behind actual current trading? Whereas stocks are only traded at certain times of the day, Bitcoin and other cryptocurrencies trade 24/7. How would you even find out in a timely manner that the price is suddenly dropping sharply? What if the crash begins at a time when you are sleeping? By the time you wake up and get the news, the price ticker might have fallen behind actual trading and there might be many still unprocessed trade requests in the pipeline.

Could the Bitcoin trading system even manage a gazillion of sell requests within a short time? Computer systems have a number of requests they can handle within a certain time. That fact is exploited by “Denial of Service” hacking attempts that overload the system with invalid requests. You will also need an internet or cellphone connection to be able to connect to Bitcoin trading platforms.

If you happen to be somewhere without a reliable internet connection – like skiing in the Swiss Alps or hiking the Appalachian Trail – when the Bitcoin bubble bursts, you might not be able to connect and sell your Bitcoins in time. Maybe some of the readers of this page even live in a developing country like the Philippines where power cuts (and the accompanying loss of internet connectivity) that can last several hours are a regular occurence (especially during the typhoon season). All your accumulated e-money will never seem more useless as when it rests on some idle storing device that is without electricity.

As already hinted at above, hacking is another potential risk with investing in cryptocurrencies. Quite recently in December 2017, 64 million Dollars in cryptocurrency were stolen in a sophisticated hacking operation. Do you have your Bitcoin wallet installed on the same device that you also use for other internet applications? Then that should worry you as for example Trojan horses could then infiltrate your device perhaps through social media and then proceed to find and hack your Bitcoin wallet.

Another major factor that will facilitate hacking is the advent of quantum computing. Even though you cannot go to a computer shop today to buy a quantum computer yet, that day is not that far around the corner anymore. Quantum computers already exist and their abilities make your ordinary computer appear like an abacus. Considering that some countries like China and North Korea maintain special computer hacking units that are not adverse to illegal activities, there is no telling what they might be able to do with quantum computers. Maybe they already have them even now. In that case, no cryptocurrency exchange or individual e-wallet anywhere in the world is safe today. That is not only my opinion as this article will show you.

One seeming advantage of Bitcoins is that their supply grows only marginally from year to year (until all Bitcoins will have been mined eventually). Governments on the other hand can always issue more fiat money into circulation under the fancy name of quantitative easing. The limited year-to-year increase in the Bitcoin supply makes the number of existing Bitcoins increase at roughly about the same rate as the growth rate of the economy.

The same is true for gold (and other precious metals) by the way. Every year, new gold is being mined but gold mining increases or decreases marginally from year to year. Major new gold reserves are also rarely discovered. A rapid surge in the gold supply from year to year due to the discovery of new gold fields and higher mining productivity cannot be realistically expected as long as the mining is still done by humans and machines. If autonomous mining & prospecting robots with advanced AI are ever developped, that could be a different story though. The limited annual increase in the supply of gold as well as Bitcoins is a very good thing as it works against inflation.

However, Bitcoins are not the only cryptocurrency. More and more different cryptocurrencies are spun off from the main Bitcoin line. In theory, the newly created cryptocurrencies will diminish the amount of remainining Bitcoins that are yet unmined. So the total number of all cryptocurrency units that can ever exist together is meant to be finite. The question is though who is going to check that? How many people in the world have the technical knowledge to check that the units of a new cryptocurrency are legitimately branched off from Bitcoins?

I think there will be a lot of scams in the future where new cryptocurrencies are just created out of thin air. The SEC has recently opened a new cyber unit to specifically check for fraud with new ICO’s (initial coin offerings) so this is taken as a legitimate threat. Are you willing to act as a guinea pig by putting your hard-earned savings into a scheme that is not backed by anything solid? Just like fiat money is nothing but paper without trust, cryptocurrencies are nothing but computer code. Luckily there exists an alternative that can not be artificially created, that has a limited supply that is only growing slowly, that is easily portable and universally accepted. That alternative is of course gold and other precious metals like silver, platinum and palladium.

Gold and other precious metals will most likely see a massive surge in demand once the cryptocurrency bubble bursts. It is even possible that precious metal prices will reach heights then that were never seen before. People tend to swing from one extreme to another. Right now it’s cryptocurrency that offers low stability but high potential for speculative gains. Gold on the other hand is an investment that offers high stability but normally only gradual price changes.

That could change after cryptocurrencies crash though since speculative money will hardly have anywhere else to go then but precious metals. Some people will then try to cover their cryptocurrency losses by investing what’s left into the seeming next bubble. As long as the number of people who are willing to buy cryptocurrencies at inflated prices exceeds the number of people selling their crypto assets, the meteoric rise of the likes of Bitcoin will go on (a little while longer).

The most reasonable advice I think is to only invest what you can afford to lose into cryptocurrencies (perhaps 2 or 3 percent of your financial assets). Meanwhile, invest another 5 to 10 percent in precious metals for stability. Why not start now while the price of gold, silver, platinum and palladium is still low? Buy-Gold.Link is proud to help you start in your endeavor of learning more about precious metals.