Collecting precious metal coins from exotic countries is one of the joys of many numismatists worldwide. The appeal for collectors of such exotic coins is enhanced by such factors as scarcity, an unusual shape and/or design of the coins, selective coloring of design elements, the use of rare metals such as black rhodium etc. Among those features, the Bermuda Shipwreck coin series mainly attracts the interest of collectors through the unusual Reuleaux triangle shape of the issued coins.

This exotic coin series started in 1996 and its associated coins are also known as the Bermuda Triangles. That is certainly a fitting nickname for this coin series given that all its coins are three-sided (in the form of a curved triangle) and that the coins depict famous ships that sunk in the geographical area that is known as the Bermuda Triangle. 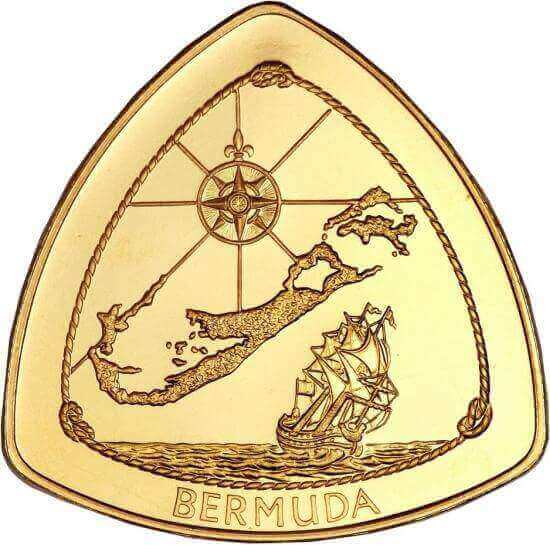 The inaugural issue of the Bermuda Shipwreck coin series was in 1996 and these coins depict a map of Bermuda, a compass and a capsizing ship on their reverse side. The gold version of these collectible proof coins was minted out of 99.9% pure gold by the British Royal Mint. Mintage was strictly limited. Since the island of Bermuda belongs to the British Commonwealth, it is not surprising to find the profile of Her Majesty Queen Elizabeth II on the obverse side of the coins.

The Bermuda Shipwreck coin series continued in 1997 and 1998 with further issues. After a hiatus of several years, the series was resumed in 2006 and 2007. The 2007 issue included large 1 kg gold coins of 91.7% purity. Besides gold coins, the series also includes silver coins (of 99.9% and 92.5% purity) and even platinum coins (of 99.95% purity) were issued as a part of this coin series in 2006. Even though the leading precious metal dealer Apmex has some coins of the Bermuda Shipwreck coin series listed on its website (see these issues from 1996 and 1997), your best bet to obtain these rare coins is probably on eBay though.