One of the mints that has seen a steady increase in the popularity of its bullion products is the Royal Australian Mint. Even though it still lags behind the Perth Mint in terms of sales and renown, more and more investors and coin collectors from Australia and other countries across the world buy the collectible limited-mintage gold and silver bullion coins this mint produces, especially when there is a new coin series. Just recently, the Royal Australian Mint announced the first issue of the new Wildflowers of Australia bullion series.

This new coin series consists of 1 oz gold and silver coins. Whereas the mintage of each issue of the 1 oz gold coins of the Wildflowers of Australia bullion series will be limited to only 5,000 coins, the 1 oz silver version will be much more readily available with its mintage limit of 50,000 pieces per issue. Still, considering the success the Royal Australian Mint has had with its previously issued coin series such as the Australian Shipwreck coins, it seems likely that the gold and silver coins of this new coin series will become highly sought-after collectors items within a few years. 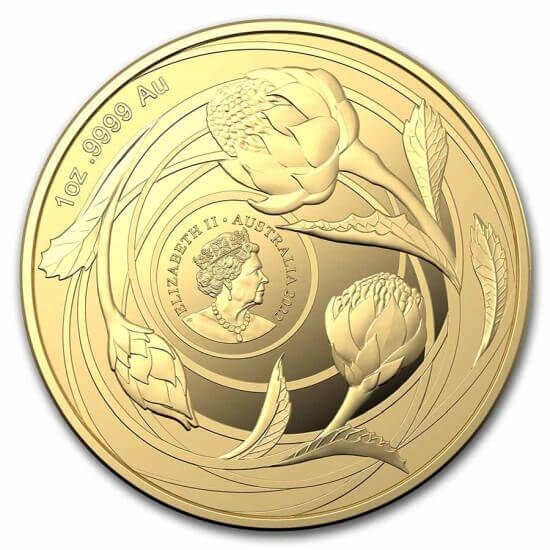 The inaugural issue of the Wildflowers of Australia bullion series depicts the Waratah flowers. The following coin issues will depict a variety of other wild flowers that are indigenous to the Australian continent. The 99.9% pure 1 oz silver coins of the series measure 40 mm in diameter and have an official face value of 1 AUD. Only brilliant uncirculated coins are issued which is the case for the 99.99% pure 1 oz gold coins of the series as well which have a face value of 100 AUD and a diameter of 38.7 mm.

The reputable American coin dealer APMEX has both the Waratah gold coins and Waratah silver coins of the new Wildflowers of Australia coin series on pre-sale right now, so act fact before they sell out!