If you have read our recent article about the Bermuda Shipwreck coin series then you’re already familiar with the concept of triangular coins. However, there is another series of gold and silver bullion coins that have the unusual shape of a Reuleaux triangle. These are the Australian Shipwreck coins of which 4 issues were minted by the Royal Australian Mint between 2019 and 2021.

The first issue that came out in 2019 featured the Dutch ship “Batavia” that had sunk off the Western Australian coast in June 1629 after striking a reef. The story of the “Batavia” involved mutiny and that is depicted on the obverse side of the coins which features a fight between soldiers and mutineers at the beach in front of the shipwreck. The image of the British Queen Elizabeth II and the respective coin’s face value are also depicted on the obverse side of all four issues of the Australian Shipwreck coins.

The second and third issue of the Royal Australian Mint’s Australian Shipwreck coins came out in 2020. The depicted Dutch ships “Vergulde Draeck” and “Zuytdorp” also sank off the perilous coast of Western Australia in 1656 and 1712 respectively. The reverse side of the Australian Shipwreck coins always depicts the ship’s name and year it sank in upside-down script underneath the ship’s image. The weight and purity information (1 oz of 99.9% pure silver or 99.99% pure gold) appears in this way on the coins’ reverse side as well. The reverse side also always incorporates some design elements from the respective ship it is dedicated to. 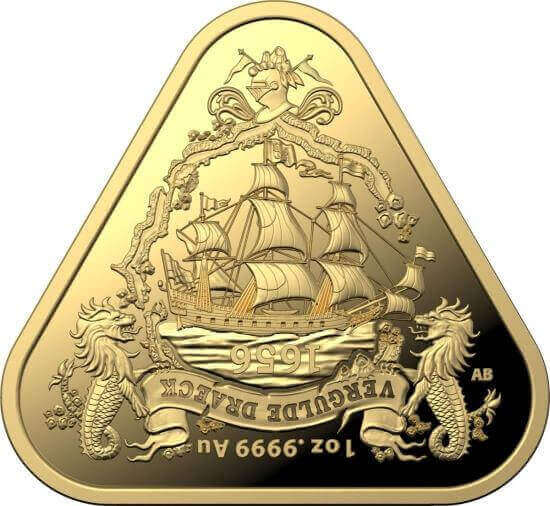 The final issue of the Australian Shipwreck coins was released in 2021 and features the ship “Zeewijk” that sank off Western Australia in the year 1727. Mintage of the brilliant uncirculated gold version of the coins (only 250 coins per issue) is much more restricted than the silver version (20,000 coins per issue). Proof coins were never issued in this series. However, the Royal Australian Mint also released a limited mintage of 1,000 antiqued silver coins per issue. This type of antiqued finish that gives the silver coins an aged look has become more and more popular in recent years and previous articles on this blog have already reported on it.

As is common with limited mintage bullion coins, eBay will probably be your best bet to obtain some Australian Shipwreck coins and add them to your collection. The coins were exclusively manufactured for and distributed by the Hong Kong based dealer of precious metals LPM and the coins have long since sold out.