When most bullion coin investors think of Chinese Lunar coins, they’ll think of the Perth Mint‘s Australian Lunar series. These coins have been available in gold and silver for quite some time and in much more abundant numbers than the British Lunar coins. However, still unbeknownst to many investors are two important facts that will completely reshape the Australian Lunar series starting next year. First of all, the Perth Mint 2020 Lunar coins will effectively be the first issue of a completely new series, the Australian Lunar Series 3. Second of all, this popular lunar coin series will for the first time have a platinum coin version available as well.

As the 1st and 2nd Lunar series before it, the 3rd Lunar series starts with the 1st zodiac animal of the Chinese Lunar calendar, the mouse (sometimes also called the rat since both types of animals have the same name in Chinese). The reverse side of the 2020 coins shows a mouse foraging for food amidst stalks of wheat (on the gold and platinum coins) or husks of corn (on the silver coins). The name of the animal is inscribed in English and Chinese on the reverse side as well along with the year of mintage and the Perth Mint’s mint mark P. As is customary with all Australian coins, the obverse side of the coins shows an effigy of the British Queen Elizabeth II as well as the coin’s weight, purity and face value. 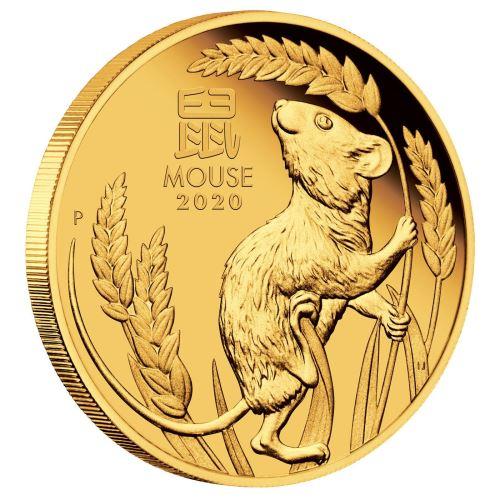 Like it is commonly practiced by other mints that issue multi-year bullion coin series, the Perth Mint’s mintage of the new 1 oz Lunar coins out of gold, silver and platinum will exceed that of other denominations. (However, several alternative weights will be offered for the Gold Lunar coins as well as the Silver Lunar coins.) Total mintage of the new 99.95% pure 1 oz Platinum Lunar coins will be limited to only 5,000 pieces and those will probably sell out fast. Investors and collectors will probably find the 1 oz Gold and Silver Lunar coins to be more readily available once they hit the market since their mintage limits are respectively set at 30,000 and 300,000 pieces.

I’m sure the coins of the 3rd Australian Lunar series will not only be sought after because of their beautiful design and limited mintage but also because of their advanced security features. At a time of increased counterfeiting of bullion coins, the importance of anti-counterfeiting measures cannot be understated. The Perth Mint clearly understands that and has chosen micro-engraving with a laser as its anti-counterfeiting method of choice. Specifically, the design on the reverse side of every coin includes a micro-engraved letter that is only visible under a magnifying glass.