It is not the shape that defines a coin but the authority under which it was minted. If it was minted under the authority of a legitimate government that assigned a legal face value to it, then it is a coin. If it doesn’t have a legal value as currency assigned to it, then it is not a coin. Unbeknownst to many and perhaps even most people these days, a coin doesn’t have to be round. Even though most government-issued coins in history were round, there are some noteworthy exceptions. Especially ancient Chinese coins came in some truly strange shapes. 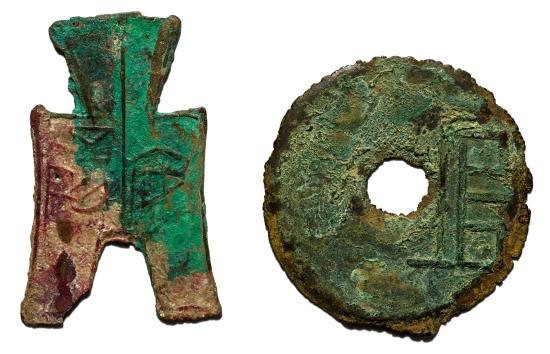 In my opinion, the contest for the strangest shapes in the history of coins is a toss up between two types of ancient Chinese coins, spade coins and knife coins. You can probably already guess how these coins were shaped from their names. Ancient Chinese spade coins existed during the periods of the Zhou dynasty (1045 to 256 BC) and the short-lived Xin dynasty (9 to 23 AD). These strangely shaped coins were made of bronze, an alloy that was about 80% copper mixed with lead and tin. Spade coins did not only look like small tools for removing weeds from the fields, they could (and probably were) actually be used as such by attaching handles to them.

There was another strange type of money that circulated in ancient China during the time of the Zhou dynasty. This type was shaped in the form of knives and is appropriately named knife money. Different shapes of knife money existed and this system of ancient Chinese coins is still not that well understood by historians even today. Not only were both knife money and spade money made of bronze but both forms of ancient currency were in circulation at roughly the same time in different parts of ancient China.

The most common ancient Chinese coins are however the round copper coins that have a square hole in the middle. These also began circulating during the time of the Zhou dynasty and continued to be minted and used during later dynasties. Gold and silver were also commonly used as currency, especially in China’s southern regions, but were mostly exchanged in the form of ingots. Whereas most gold bars and silver bars that are traded today are shaped like bricks, an ancient Chinese gold or silver ingot (a.k.a. sycee) could be shaped like a boat, flower, tortoise or other things.