In most product-based types of businesses it would be unthinkable to completely change the visual design of a product with a proven 35-year track record of garnering sales. However, the market of bullion coins is one of the rare exceptions to that general rule. Not so long ago, it was the British Britannia coins that were redesigned for 2021 and now it is the US Mint that has presented the 2021 redesign of the American Eagle coins.

The American Gold Eagles as well as the American Silver Eagles were both first issued in 1986 and their design that differs from each other (whereas most other bullion coins that are issued in both gold and silver use the same design for both versions) has basically never been changed since then. In fact, the only tiny design change of these coins until now has been the recent issue of collectible privy-marked American Eagle coins that were dedicated to the 75th anniversary of the end of World War II.

The first redesigned 2021 American Gold and Silver Eagle coins are expected to be issued sometime in mid-year 2021. The iconic coins will still be easily recognizable since their obverse side design will largely remain the same. That means that Augustus Saint-Gaudens‘ famous Lady Liberty design will still appear on the obverse side of the Gold Eagles just like Adolph A. Weinman‘s Walking Liberty design will still appear at the center field of the Silver Eagles. Both of these iconic designs will simply get a refresher which could mean that these images will look crisper through the enhancement of some of their details (making use of advanced minting technology that was not yet available in 1986). 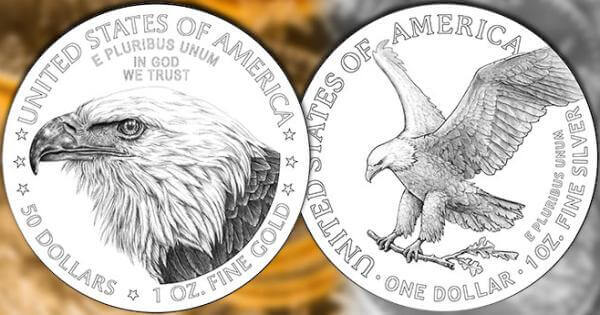 The 2021 redesign of the American Eagle coins therefore mostly affects the reverse side design of both the Gold and Silver Eagles. The reverse of the redesigned 2021 Gold Eagles will depict a close-up sideways portrait of an eagle in stunning detail. A new highly detailed eagle image will also appear on the reverse of the redesigned 2021 Silver Eagles. It will show a bald eagle with widely outstretched wings coming in for a landing with its talons clasping an oak branch that it wants to add to its nest.

In addition to the above mentioned visual changes, the 2021 redesign of the American Eagle coins also involves the implementation of some new anti-counterfeiting measures. However, no specifics regarding these measures have been disclosed to the public yet. Furthermore, collectible American Eagle coins such as proof coins and other possible versions of the coins that are destined for the numismatic coin market will still keep their current design in 2021.