Both the circulation quarters as well as the silver bullion coins that are issued were initially authorized in 2008 through the America’s Beautiful National Parks Quarter Dollar Coin Act. Both types of coins that are issued under this program depict motifs relating to America’s national parks and other national sites. The order in which the 56 different existing coin designs were released was not random but dependent upon the order in which the featured site was first established as a national park or national site.

The circulating coins of the series each have an official face value of 0.25 USD and are made out of base metals. The limited-mintage America the Beautiful silver coins have the same official face value but are 5 oz silver coins of 99.9% purity. The large coins measure 3 inches (76.2 mm) in diameter and are issued with two different finishes, a matte uncirculated finish and as shinier bullion coins.

The fineness and weight of the 5 oz America the Beautiful silver coins is incused into the edge of the coins which is much different from almost all other silver bullion coins that display that information on one of its two surfaces. Incusing that lettering into the side of such a thin silver coin (the coins are just 4.064 mm thick) required a special coin press that the US Mint ordered from Germany before the mass production of the coins could begin in 2010. 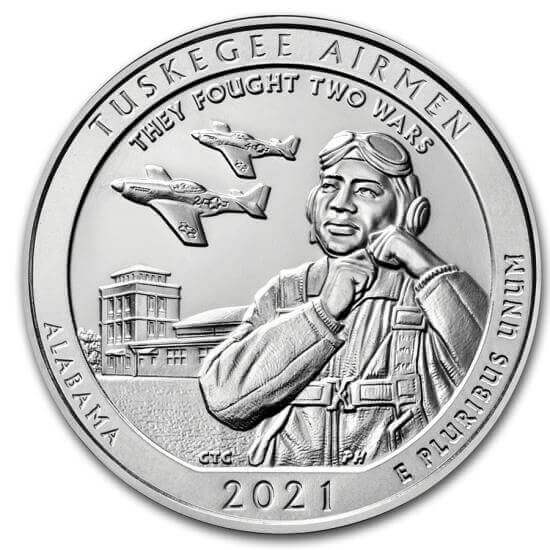 Fifty-five different coin designs already exist under the America the Beautiful Quarters Program and the 56th and final coin issue is scheduled for release this January 2021. The reverse of this final issue represents the US state of Alabama and its Tuskegee Airmen National Historic Site. A Tuskegee Airman is depicted putting on his gear in front of the Moton Field control tower as two P-51 Mustangs fly overhead. While there are therefore 56 different reverse designs of the America the Beautiful silver coins, the obverse side design is always the same. It always shows a left-facing portrait of George Washington.