May 15, 2020 by Buy-Gold.Link in Gold, Minting Institutions, Precious Metal Investing

Whereas 22 karat gold coins like the South African Krugerrands used to dominate the gold coin market for a long time, most newly issued gold coins these days are 24 karat. One reason for this might be that many new investors seem to prefer higher purity gold coins and another is that both government-run and private mints and refineries want to showcase their technological expertise in being able to refine gold to a higher standard of purity. If these trends continue for a long time into the future, could we see a time when 99.999% pure gold coins become the de facto standard? Until now, the Royal Canadian Mint is still the only mint that issues gold coins of this level of purity though.

Right now, the choices of different 99.999% pure gold coins are still fairly limited. The Royal Canadian Mint’s “Call of the Wild” coin series is the first one that comes to mind. These coins should also be the easiest to obtain since the brilliant uncirculated version of the coins is minted annually according to the current market demand, so without a strict mintage limit. This series of 99.999% pure gold coins started back in 2014 with the Howling Wolf motif and was originally scheduled to only last for 3 years. However, the Gold Bobcat coins that are released this year are now already the 7th issue in the series so it is unclear for how much longer the series will be continued.

For the 30th Anniversary of the Silver Maple Leaf in 2018, a total of 500 reverse proof 99.999% pure Gold Maple Leafs were issued that had their Maple Leaf design on the reverse side platinum-plated. Selective platinum plating was also used on one of the two 99.999% pure 1 oz coins that are included in the special “Enchanting Maple Leaves” coin set that was issued 175 times in 2018. 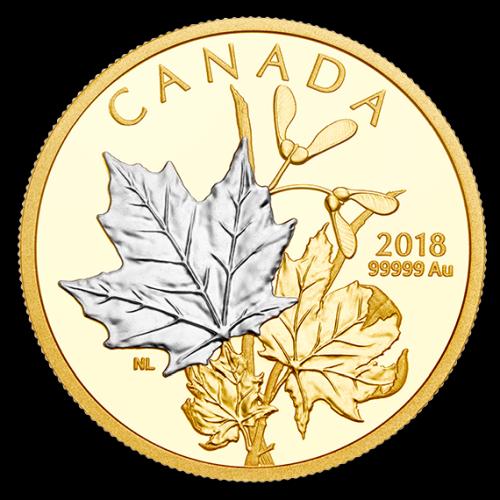 selective platinum plating on one of the two 99.999% pure gold coins that make up the 2018 Enchanting Maple Leaves coin set

However, the most famous of all the 99.999% pure gold coins that the Royal Canadian Mint has issued are undoubtedly the six 100 kg Maple Leaf coins, one of which was stolen from the Bode Museum in Germany’s Berlin back in 2017. The stolen coin has never been recovered though four individuals that are suspected to have stolen it were put on trial back in 2019. Three of the four suspects have since been convicted and sentenced to jail.

The Royal Canadian Mint’s most recently issued 99.999% pure gold coins are the ten 10 kg Gold Maple Leaf coins that were unveiled in March 2020 as well as the four reverse proof hologram coins that are included in the 2020 Gold Fractional Set (1 oz, 1/4 oz, 1/10 oz and 1/20 oz). These 500 special sets have apparently all been sold already. However, the mint has planned the shipment date of these special sets for June, so I think it’s quite likely that some buyers will list their ordered set on eBay or Amazon shortly afterwards.