It has long been commonplace for mints to produce a certain number of proof coins for collectors in addition to the standard bullion coins that are primarily bought by investors. In recent years, we have also seen a trend for these proof coins to be produced in additional sizes/denominations that are not produced as standard bullion coins. Even though these were usually large coins (for example 5 oz and 10 oz coins as well as 1 kg coins), the coin’s denomination was often a multiple of five or ten. Now, Britain’s esteemed Royal Mint has produced an 8 kilo gold proof coin that may perhaps even be the world’s first gold bullion coin of this highly unusual denomination. 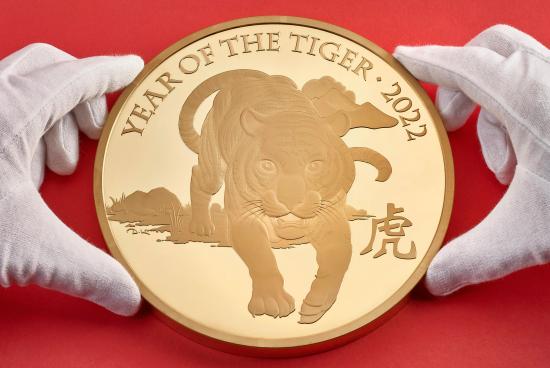 This newly-minted 8 kilo gold proof coin joins the Royal Mint’s Shengxiào collection as its largest denomination that was ever produced. It displays the same image of a prowling tiger on its reverse side that can also be seen on the 1/4 oz, 1 oz, 5 oz and 1 kg proof issues of the British Gold Lunar coins that were already issued earlier for the Year of the Tiger 2022. Only one single such 8 kilo coin will ever be issued though which is not so surprising once you consider how much effort it took to produce that coin. First of all, it alone took about 200 hours for the Royal Mint’s state-of-the-art engraving machines to cut the design onto the 8 kg coin. Then, a ‘Master Toolmaker’ removed all cutting marks from the surface of the coin by hand before hand-polishing it for 100 hours.

Finally, it took another 50 hours for the coin to be laser frosted in order to give its surface a matte finish. Besides the coin’s weight of 8 kilos, the number eight also appears in the coin’s diameter of 185 mm. The Royal Mint’s choice to produce an 8 kilo gold proof coin that has the number eight appear frequently in its stats was no coincidence though. Just like the number 6, the number 8 is considered lucky in Chinese culture and often associated with wealth and prosperity.