Which contemporary gold bullion coin is the most traded (and most widely owned) worldwide even 50 years after its inception? That distinction belongs to the 22 karat South African Krugerrand coins that experts estimate have been traded 60 million times since they were first introduced in 1967. The 50th Anniversary South African Krugerrands that are issued in 2017 distinguish themselves in a number of ways compared to previous years.

To mark this occasion, all 2017 South African Krugerrand coins are adorned with a special privy mark. On the gold coins, the circular privy mark can be found on the reverse between the springbok’s neck and the 17 (for 2017). The mark is made up of the number 50 (a bit smaller in size than the 17 to its right) that is surrounded by a smaller circular inscription containing the years “1967” and “2017” as well as the words “YEAR ANNIVERSARY”. 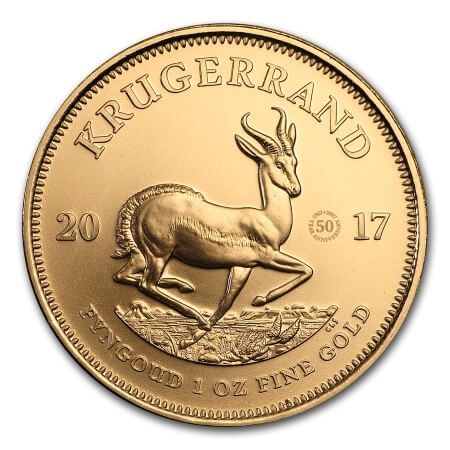 This year will also see the addition of four more sizes of Krugerrand gold coins. Two smaller Krugerrand denominations of 1/20 oz and 1/50 oz will be added as well as two large Gold Krugerrands of 5 oz and 50 oz. Whereas the 1 oz Gold Krugerrand has been minted continuously since 1967, the fractional Krugerrands of 1/2 oz, 1/4 oz and 1/10 oz were only added in 1980.

Whereas the design of many other contemporary gold bullion coins is also used to produce silver, platinum and even palladium coins by the same manufacturing mint, the South African Krugerrand had been up to now exclusively minted in gold. That will change this anniversary year with the initial release of the South African Silver Krugerrand coins. The new 2017 Krugerrand silver coins were minted with the use of digitally enhanced dies that result in a level of detail that was previously impossible to achieve.

The 2017 Silver Krugerrands are struck out of 99.9% pure silver. Only 1 oz silver coins are made and both uncirculated as well as proof coins will have their mintage capped (at 500,000 and 15,000 coins respectively). The 1 oz Silver Krugerrand coins have a diameter of 38.725 mm which makes them slightly larger than the gold coins of the same denomination. 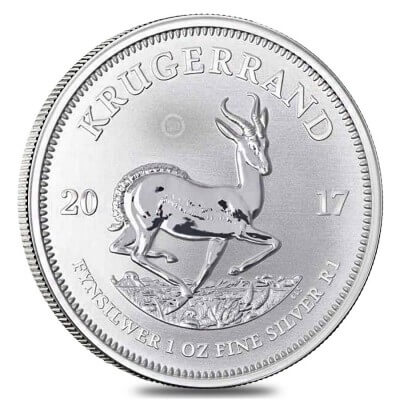 The silver edition of the 50th Anniversary South African Krugerrands uses the same design as the gold coins. A profile image of Paul Kruger, the first president of the Republic of South Africa, is displayed on the obverse and a springbok antelope on the reverse. The reverse side of the new Silver Krugerrands also contains the “50 year anniversary” privy mark, just like the 2017 Krugerrand gold coins. The location of the privy mark on the coin is different though. It appears just above the springbok’s back on the silver coins.

The 2017 Silver Krugerrand won’t be the South African Mint‘s only new release that marks the Krugerrand’s 50th anniversary this year. A 1 oz Platinum Krugerrand proof coin will be issued as well. Only 1,967 such proof coins will be issued this year out of 99.99% pure platinum. The coins are roughly the same size as Gold Krugerrands with a diameter of 32.69 mm. The 2017 Platinum Krugerrands bear the 50th anniversary privy mark on their reverse as well and have an official face value of 10 Rand. 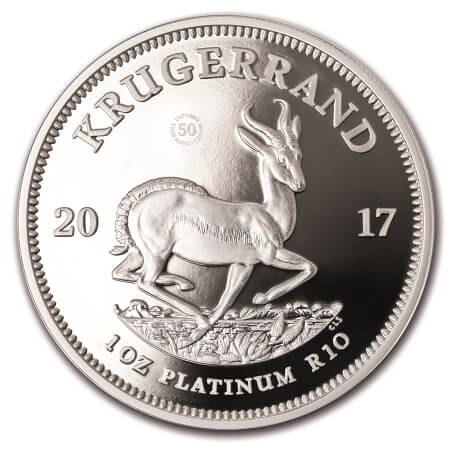