The world’s only 24k gold watch

Besides buying gold coins and gold bars, more and more precious metal investors are looking to buy other types of bullion items. Among the Afro-American population in the US, heavy gold necklaces have long been a popular trend (especially in the hip-hop/rap music scene) whereas Indian women like to buy all kinds of expensive gold jewelry (especially for weddings). For men who want to show off their wealth a bit, wearing an expensive gold watch has been a century-long trend already. Whereas the cases of most gold watches were historically made of 14 karat gold, newer models are increasingly 18k and I even found one 24k gold watch whose case consists of 99.9% pure gold.

This unique gold watch was only introduced in 2014 and the fact that its case is made out of pure gold is not the only stunning and unique feature of it. For starters, it also has a very long and complicated name: the Bulova Accu-Swiss “First Edition of the Joseph Bulova Collection” Percheron 24k Gold watch.

Even though Bulova is an American watchmaker that was founded in 1875, its Accu-Swiss watches are manufactured in Switzerland. To produce a solid watch case out of 24k gold, Bulova developed a special forging process so that the gold would be hard enough. The design of the strap is also special in that it combines crocodile leather with titanium rivets and a black steel milanese inner bracelet. 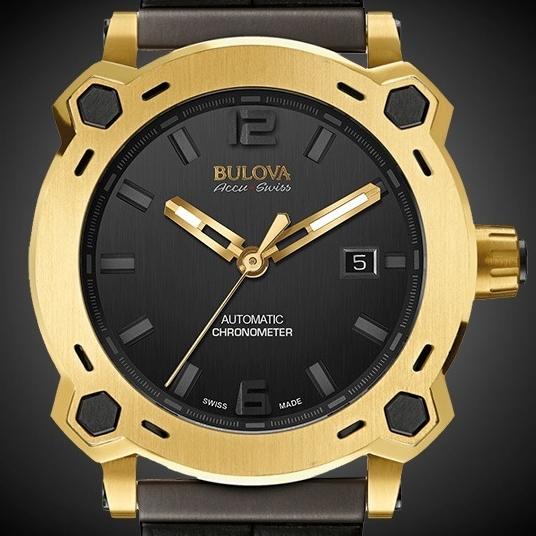 Watch lovers that are excited now at the news of the world’s first 24k gold watch will be disappointed to hear that this watch will be almost impossible to acquire. That is not only due to the hefty price tag of 42.000 USD but mainly due to the limited production numbers. As a highly limited piece, all the manufactured Bulova Accu-Swiss “First Edition of the Joseph Bulova Collection” Percheron 24k gold watches (I could find no information online how many pieces were produced) probably sold under the table to Arab Sheikhs or other super-rich people that already possess nearly everything.

If you see one of these watches popping up on eBay, it’s probably a fake. After all, as the world’s only 24k gold watch, the Bulova Accu-Swiss “First Edition of the Joseph Bulova Collection” Percheron is probably something that even an oil sheikh will not sell but rather pass on in his inheritance.