Apart from the few gold and silver bullion coins that change their reverse design each year like the Australian Gold Kangaroo coins or the Chinese Gold Pandas and Silver Pandas, it is highly unusual for a long-running bullion coin series to make a change to its design. The US Mint however has decided to do just that this year by issuing the 2021 American Eagle Type 2 coins that have a completely new reverse design.

Perhaps even more unusual is the fact that the design switch is made mid-year. Usually, mints would make such a switch from one annual edition to the next just like the Mexican Mint did for example with the Mexican Gold Libertads in the year 2000. The US Mint’s decision to make the design switch mid-year turned out to be a very clever move though as collectors are now scrambling to buy both 2021 versions of the American Gold Eagle and Silver Eagle coins, the last coins with the old reverse design as well as the first 2021 coins with the new updated reverse.

So how exactly does the coin design of the new 2021 American Eagle Type 2 coins differ from the original design that has been in continuous use for 35 years? As far as the obverse design is concerned, not much has changed in fact. The traditional artist mark of Augustus Saint-Gaudens was added to the obverse side of the Type 2 coins and some minor design details were added from the original bronze cast as well. Apart from these small changes, the obverse design of the 2021 American Gold and Silver Eagles has remained the same.

The original reverse design of the American Gold Eagles depicts a male eagle carrying an olive branch while flying above a nest that contains a female eagle and eaglets. That design was now replaced by a completely new reverse design on the 2021 American Eagle Type 2 coins. The new design was created by the United States Mint Artistic Infusion Program Designer Jennie Norris and sculpted by the United States Mint Medallic Artist Renata Gordon. The initials of both of these artists appear on the new reverse as well. 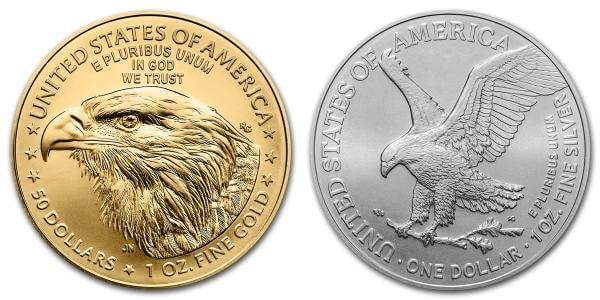 The new reverse design of the Gold Eagle coins shows a close-up leftward-facing portrait of an eagle’s head. Additionally, the inscriptions “E PLURIBUS UNUM” and “IN GOD WE TRUST” found their new placement just underneath the inscription “UNITED STATES OF AMERICA” at the top of the coin. Furthermore, the inscriptions “50 DOLLARS” and “1 OZ. FINE GOLD” traded places at the bottom left and right.

The new Type 2 Silver Eagle coins have also seen changes to the placement of their inscriptions on their reverse side. Whereas their old reverse design showed the heraldic image of an eagle with a shield, the new reverse of the silver version of the 2021 American Eagle Type 2 coins shows the image of a single eagle coming in for a landing while carrying an oak branch as if to add it to a nest.