Whereas most investors rightfully stick to buying brilliant uncirculated bullion coins, many collectors prefer proof coins with their more accentuated contrast between the frosted design elements and a polished mirrorlike background. Now, the US Mint has issued reverse proof coins out of palladium, the 2019-W $25 American Palladium Eagles, that can perhaps be regarded as a bit of a sales experiment. After all, palladium spot prices are at their highest level ever recorded, so one might argue that such a collectible coin issue could and perhaps should have been better timed for a period when palladium prices slump a bit.

Since this is only the 3rd American Palladium Eagle coin issue of all times, it is perhaps even stranger that the US Mint has chosen to continue this new coin series with a reverse proof edition instead of issuing regular bullion coins. After all, the 15,000 brilliant uncirculated Palladium American Eagles that mark the beginning of this series in 2017 sold out on the first day. The phenomenal success of the 15,000 proof Palladium Eagles that were then sold next in 2018 perhaps explain the mint’s decision to try a collectible reverse proof edition next. Since this 2nd issue sold out within 5 min, why not up to ante by switching from proof to reverse proof while at the same time increasing the maximum mintage from 15,000 to 30,000 coins? 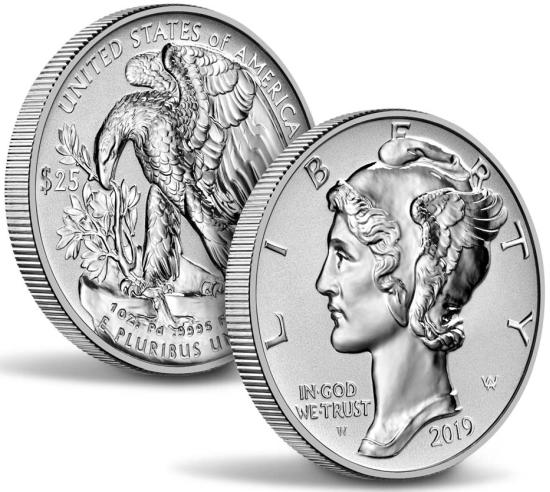 If still available at the time when this article is published, collectors can order the reverse proof coins from this page of the US Mint shop. About a third of the 30,000 offered coins reportedly sold on the first day of sales on September 12th alone. The design of the coins is identical to that of the two earlier issues, only that this time it’s the design elements that are polished and the background that is frosted (whereas on proof coins the background is polished and the design elements are frosted). Adolph A. Weinman‘s design of Lady Liberty wearing a winged Phrygian cap appears on the obverse side of the 99.95% pure 1 oz coins and an eagle perched upon a rock can be seen on the reverse of the coins that were struck at the West Point branch of the US Mint.