Have you ever wondered which contemporary gold bullion coin can look back upon the longest history? That distinction goes to the British Gold Sovereign that will celebrate its 200th anniversary in 2017. The original Sovereign even goes as far back as 1489 when a thus-named coin was struck under the reign of King Henry VII. That original coin was astonishingly large with a diameter of 42 mm. The medieval Sovereign was successively debased in value but nevertheless lasted until 1662. After the turmoil of the Napoleonic Wars, the British Royal Mint revived the Sovereign and the modern Gold Sovereign coin made its first appearance in 1817. The 2017 Gold Sovereign’s 200th Anniversary is being marked by several changes in the design of the coin.

Most of these design changes for the 200th anniversary of the Gold Sovereign only apply to proof coins though. The only design change affecting brilliant uncirculated Sovereign gold coins is a special mint mark that appears underneath the slain dragon and to the left of the date on the reverse side. That small mint mark that had never been used before for previous anniversaries is shaped like a shield with the number 200 on top of it.

The 200th anniversary of the Sovereign gold coin is mainly celebrated by several small design changes for proof coins. The first one of those is that the date, normally situated underneath the slain dragon on the reverse along with Benedetto Pistrucci‘s initials B.P. , appears on the obverse side of the coins above the crown of Queen Elizabeth II. That is the first time since 1887 that the date appears on the obverse. 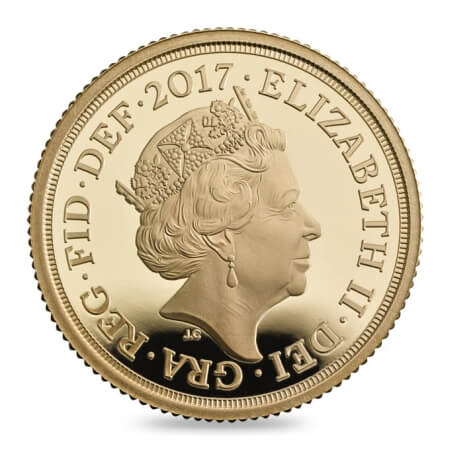 The reverse of proof Sovereigns also sees some changes. Benedetto Pistrucci’s design of St George and the dragon had to shrink a bit in size in the middle of the coin in order to make space for a garter border. The old French words “HONI SOIT QUI MAL Y PENSE” (“Evil unto him that thinks evil of it”) are written on the surrounding garter just like they first appeared on Sovereign coins in 1817. This original garter design by Benedetto Pistrucci had last been used in 1820. 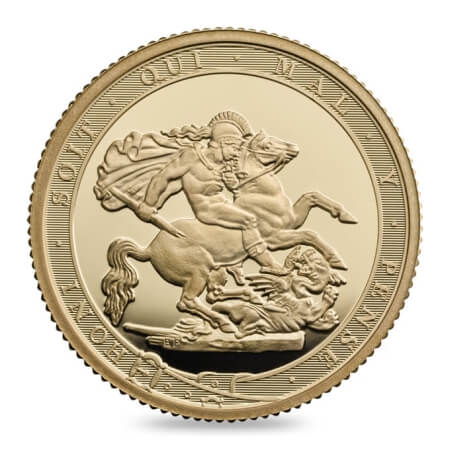